PV Solar: A Boon for Thailand 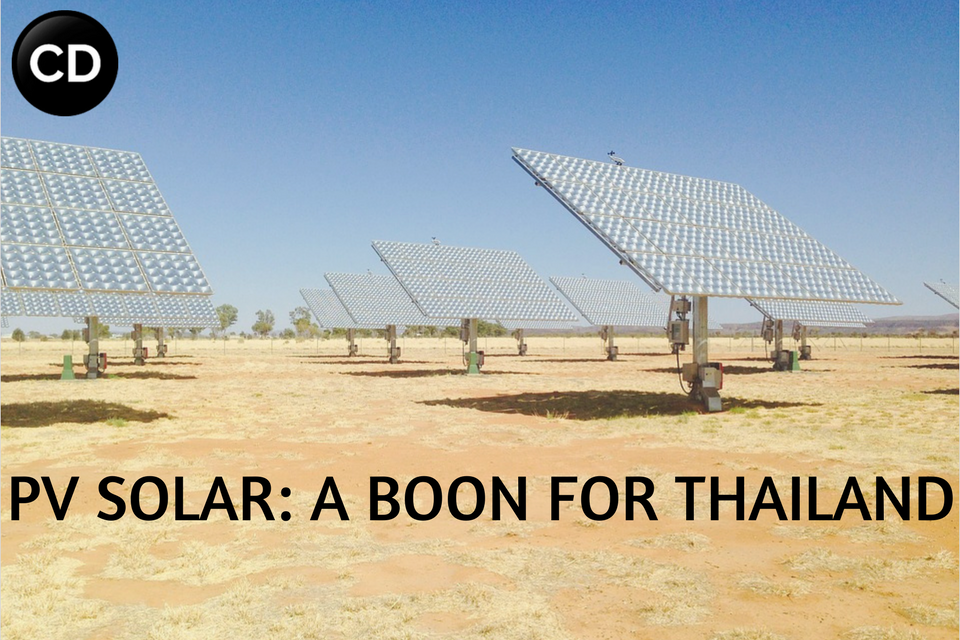 There were various reports prescribing about the tremendous growth in the country’s PV Solar market. From one of the reports, published by Reuters on July 23, 2015, which was describing the increasing capacity of the PV solar by 700MW and 1.2GW soon. There could be an investment of around $2.5 billion by the 2015 year-end. In addition, it was said that Thailand could be the most attractive market in the whole South-East Asian market. Analysts working within the industry have estimated that around 250,000 new rooftop solar PV systems could be added by 2020.

As a part of the goal, it was announced to achieve 30% share of renewable energy with an object of 6000 MW PV solar capacity. The Thai government has also approved the latest Alternative Energy Development Plan which outlines the country’s ambitious targets.

In September 2015, the government had launched the government agency and agricultural cooperatives program with a target of 800MW, this was also aimed at realizing solar farms up to 5 MW in size in the form of public-private partnerships. Overall, the government was expected to invest some THB 36 billion (USD 1 billion) in various projects in 2016. According to the latest release of the Energy Regulatory Commission (ERC), only 470 MW solar power had been installed in 2014, 722 MW in 2015, and 732 MW have been installed just in the first nine months of 2016.

According to a Market Research Thailand’s 2016 report – “Given that rooftop PV solar currently accounts for 5% of Thailand’s market, solar self-consumption is forecasted to expand rapidly in the near future. A pilot project for up to 100MW is underway for which 10MW have been reserved for household systems below 10kW.” Undoubtedly Thailand has great potential for both farms and rooftop solar systems. Although according to the ERC release, in the above paragraph, in 2016 they lag to fulfil the promises and got lost in uncertainties and promised to emerge with the real growth and sustaining improvement in 2017.

In addition to the Energy Industry Act 2007, solar projects sized greater than 3.7 kilowatts have to comply with the Factory Act 1992, the Building Control Act 1979, and the Energy Production and Development Act 1992, and the associated authorities.

Thailand has also set up an Alternative Energy Development Plan (AEDP) which targets to increase the share of renewable energy to 25% of final energy consumption by 2021. The major bet has been put onto PV solar energy. Although the government has made several provisions to implement it, there are few barriers especially permitting barriers and financial barriers. The government has tried to remove some financial barriers in implementing PV solar energy rooftops. The government has reopened the support in 2014 in the form of the feed-in tariff for a quota of about 500-600MW of new solar farms. According to a Reuters report, companies planning to take part include Thai Solar Energy, which plans to partner with cooperatives and state agencies for 49 MW, and Inter Far East Energy Corp, which is looking to develop 11 MW of projects with the Thai navy. Thailand’s Energy Regulatory Commission has said it expects some 1,200 applicants in Phase 1, including both private developers and public agencies.

The sequence of how the administrative process will go is as follows:

These are the average tariffs, they keep on changing with usage and it is adjusted every 4 months. The above information is as provided by the government on 22nd August 2012. 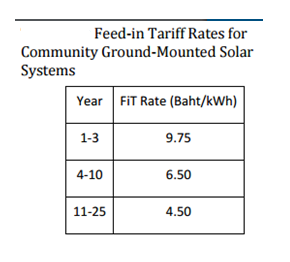 Would battery back-up be needed?

Yes, a battery back-up is needed. All the companies provide this in their hardware kit.

Who would want PV Solar?

The market is having a high potential. This is a growing market in Thailand and the government is currently supporting PV solar installation heavily to fulfil its targets for renewable sources of energy. Apart from residential, there is a big market of PV solar in government offices, big corporates, agriculture units, military and defence etc. These are the areas where large electricity is used and PV solar can be a good source of cost-cutting for them.

Stability of feed in tariff:

As has been mentioned above, government policies are highly unstable in Thailand and you should not rely on the government’s commitment.

Currently, the market is growing rapidly. The market is in the development stage which makes an illusion of no market but in a very short time. Therefore, Thailand is going to be the biggest solar power enabled the country among all the ASEAN countries. This also gives an opportunity to establish your services in neighbouring countries by directly exporting as well as by providing consultancy to the companies there.

Investing in PV solar market today in Thailand can reap great profits in the near future.

There are a number of factors that affect the actual power output, for example, geographical location, orientation and tilt angle of solar panel array, amount of shade case on the solar panel, temperature.

So, ROI mainly depends upon the Fit confirmed by the government.

10 thoughts on “PV Solar: A Boon for Thailand”