Pharmaceuticals- Is pandemic an opportunity? 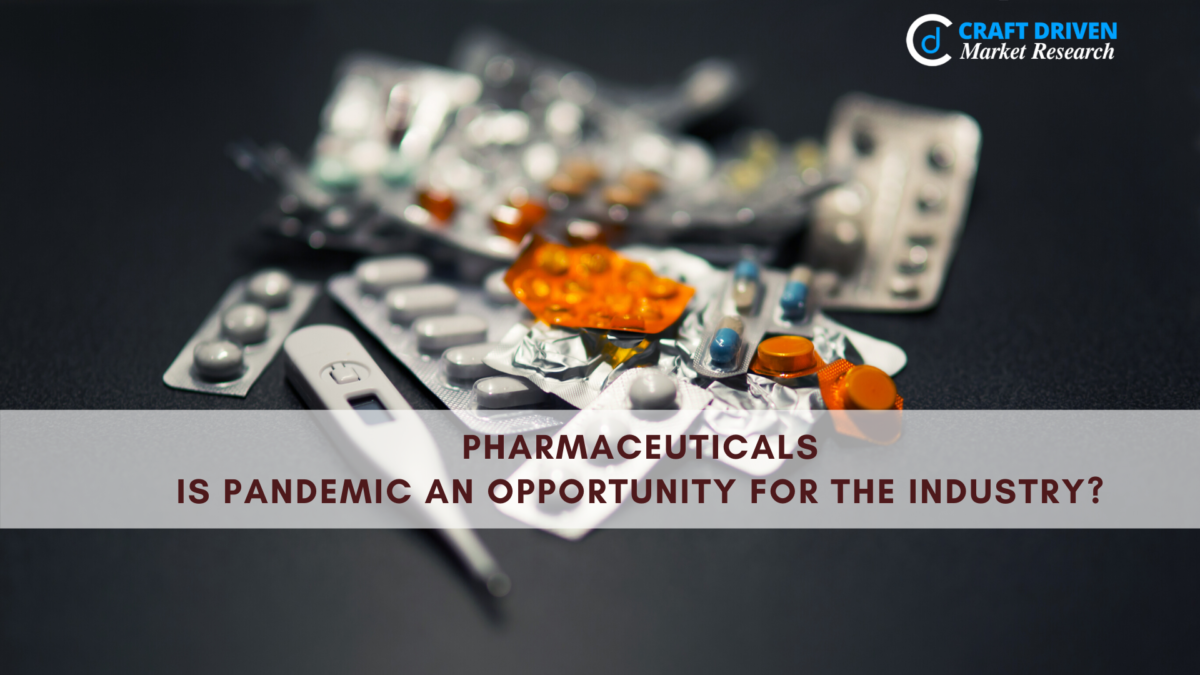 Pharmaceutical industry is among the fastest growing industries in the world. It comprised a sale of $1.3 trillion around the world in the year of 2018, with 44% sales accounted by North America.

Indian Pharmaceutical Industry supplies about 20% of the global exports in terms of volume which consist of more than 50% of various vaccines on a global level. It also caters to about 40% generic demand in United States of America and up to 25% of all the different medicines in United Kingdom. With the onset of a much more liberalized market in India, the pharmaceutical industry has witnessed a boom starting from 1970s. The Indian Patent Act being passed also added to this rapid growth of the industry. As of September 2018, the industry has a CAGR of 22.4% which is massive as compared to the other industries. The biggest player in Indian Pharmaceutical industry in terms of annual turnover is Sun Pharmaceuticals (273.28 billion rupees), closely followed by Lupin Limited and Dr. Reddy. Cipla is in the 4th position (155.77 billion rupees). The different pharma firms in India received about 305 ANDA approvals from USFDA in the year 2017. The players in Pharmaceutical sector in India implement multiple strategies including dominance in cost through integration along vertical, making more differentiated products, focusing different markets and growing continuously through mergers/acquisitions. These strategies become extremely important to be profitable and to create a competitive advantage among the different players, given the number of strict regulations on quality as well as distribution. 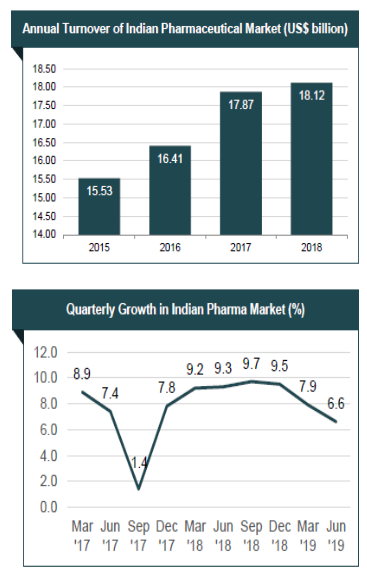 The above graph depicts the steady growth of the Annual turnover of Indian Pharmaceutical Market and shows the fluctuation in quarterly growth of the market.

The following are the 4 major segments in the Indian Pharma industry in which different firms operate. The segments involve products as well as services, for base companies or for outsourcing for clients inside as well as outside the country.

The threat of new entrants is comparatively low for this industry making it more attractive. Different factors which make it possible are as following:

The hospitals and other health organizations have greater control on the prices of the products they purchase from different pharmaceutical firms, as there are a lot of players in the industry. Also, influencers such as doctors and consultants exercise power as they have the choice to select products from multiple firms. The end consumers are left with limited decision-making powers as a result of all the above factors. There has been a considerable increase in the prices of generic drugs over the last few years.

Due to the abundance of firms supplying required chemicals for manufacturing medicinal products and due to the lack of seasonality in the supply of raw materials, the pharma firm will have an upper hand on these suppliers(very less cost of switching suppliers), thus making the bargaining power of the suppliers very less.

With different chains of hospitals relying on pharmaceutical companies for medicinal products, the threat from substitutes is very less. The available substitutes for the industry are Naturopathy, Ayurvedic and Homeopathy.

Pharmaceutical sector is one industry where the firms have to abide to a lot of legal/ governmental regulations with consideration of different political factors. They form different formal as well as informal boundaries or rules under which the firm should operate. Some examples for these are restrictions on trade, different  policies of tax, laws of employment, environmental regulations etc. The Indian government introduced National Pharmaceutical Pricing Policy(NPPP) in 2012 to control the cost of 348 drugs considered essential, based on their dosage as well as potency.Firms or manufacturers can sell the products only at process equal to or less than these fixed values. With NPPP implemented the profit margin went down drastically for retailers(20% to 16%). This has created a lot of confusion in the minds of investors regarding the future of pharma industry in India.

On ensuring the transparency in the industry, Medical Council of India(MCI) gave out strict guidelines, thus having a close control on bribing and unethical deed among doctors and other medical practitioners in hospitals as well as different healthcare firms. As part of the Indian Patent Act, licensing has been made mandatory for the pharma firms based on the guidelined given in section 84. As per the Section 84 guidelines, firms need to ensure that the medicine prices are reasonable, medicine met the citizens need or requirement and that the patent was not regionaly created.This ensured that the generic drugs which were over priced earlier are available to the population of India in reasonable prices now.

Different Economic factors play a major role in the customers purchasing power for different medicines. This also ensures that there is an equilibrium between the demand and supply of different drugs, esp, the ones for common diseases. Some of the factors which affect the Macro economy as a whole are rate of inflation, cost of labour, work skill, etc. Also, the different threats analysed in porters 5 forces above give more details on different economic factors. The different social factors in pharma sector are mainly based on demographics, age groups, behavioral as well as cultural aspects. This depends upon the life style, health consciousness education, safety emphasis etc.

The Pharma industry is growing at a rapid rate in India now and is expecting double-digit growth in the upcoming financial years. The following excerpts describe the different situations in Pharma sector now and how the Indian firms are acting in the situations.

Now the prices for vitamins and penicillin are double or triple the price.  Similarly  the cost of paracetamol has gone up. Another major impactt is that pharmaceutical companies faces disruptions due to extended factory closures in China. It may impact the supply of active material and ingredients (mainly from China), as well as the import and export of pharmaceuticals. There is also the potential for negative impacts of both a medium- and longer-term nature on R&D and manufacturing activities, as well as delay on projects/programmes not related to the core supply chain/data management operations.  The Indian domestic pharma industry is highly dependent on imports, with more than 60 per cent of its API requirements being imported. Of the total imports of APIs and intermediates into India, China accounts for nearly 65-70 per cent.

a) Ramping up exports in pharmaceuticals: According to the Indian Brand Equity Foundation (IBEF), pharmaceutical exports of India from the financial year 2012 to 2019 have steadily grown from $10 billion to $19 billion.

b) Becoming a preferred medical tourist destination for those seeking affordable treatment in quality secondary/tertiary health services: Over the last few years, particularly since 2014, the number of people coming to India for medical treatment has grown annually at about 55% (see Figure 3). According to Ministry of Tourism, the medical tourism space was valued at around $3 billion (US$) in 2015 and at $9 billion in 2020

c) Pursue medical diplomacy by providing medical training and technical expertise to many other developing nations whose healthcare systems are much worse than India: To project itself as a country practicing medical diplomacy through soft-power, if there is one country from which the Indian state can particularly learn from, is Cuba. Despite being a small-nation with much lower per-capita income (as compared to many developed nations), Cuba’s public healthcare system is one of the best in the world