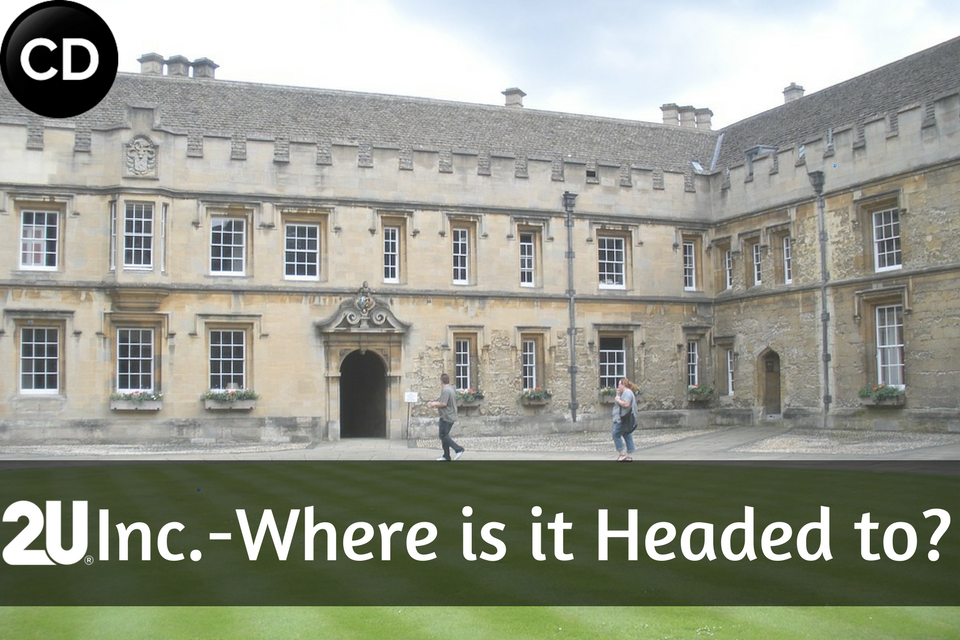 2U Inc., formerly known as 2tor Inc., is a New York City-based educational technology startup, founded in 2008. 2U Inc. was founded by John Katzman, also the founder of The Princeton Review. Co-founders comprise of Chip Paucek, CEO of 2U Inc. (former CEO of Hooked on Phonics) and Jeremy Johnson.

2U Inc. is an education based technology startup partnered with prestigious universities with the apex use of technology viable services with the help of cloud-based Saas (software-as-a-service) program. Further implementation assistance of infrastructural assistance, coursework design, etc. It’s a startup associated with prominent non-profit colleges and universities offering online degree programs.

2U Inc.’s Origin and Motive:

2U Inc. was born in 2008 with a thought to create a revolution in the education industry and make it accessible to those who are not able to travel to the Universities physically. This is one of the foremost start-ups which worked towards enhancing the virtual experience of the students in receiving a degree. It has been growing since then even though it had to face several challenges. The concept of the organisation was simply to provide more opportunities to the students regarding their education and skill development. The founders early on realised how many students cannot study in their area of interest due to constraints on the number of seats in a University or college, but the company fulfilled the gap by providing e-learning courses to the students directly from the Universities.

2U Inc. has collaborated with a number of colleges and universities. The mission of the company is to encourage online education and providing them with the tools and resources needed in the structuring of online extensions to the courses and programs. 2U Inc. is not profit-making education company so far and it is not offering any degree from its end. It only provides cloud-based SaaS solutions to the associated colleges and universities to introduce their online curriculum without any trouble. Online curriculum includes video classes and online learning platform for all at equity, approaching the career and future guidance of the students and the teachers.

2U Inc. not only helps the Universities in structuring their e-courses but also works towards increasing interaction of the students with their professors and the fellow students while they follow the online method of teaching.

It is rendering exceptional assistance to those implicit students at the same tuition fee equivalent to campus fee. It is focusing and concerned towards the students’ issues about the small class sizes, vocation services and placements. Thus students only pay the usual nominal fee, but in lieu of going to class once a week, they attend a live video chat session with the professors and with other students as well.

Recently about a month ago, 2U Inc. has acquired GetSmarter, founded in 2008, a South African startup based on providing short-term online certification courses to distance learning students. The deal was cracked for $103 million in cash and $20 million as earn-out provision also in cash. GetSmarter also has several alliances with top-tier universities in the world.

The company has raised approx. $100 million in funding since 2008. In March 2014, the company went public to raise $119 million at $13 per share by offering its 9.2 million shares. 2U Inc. is listed on NASDAQ by the name of TWOU. Prior to its IPO, the company raised $96 million from Bessemer Venture Partners, Highland Capital Partners, Redpoint Ventures, Novak Biddle Venture Partners, City Light Capital, SVB Capital and WestRiver Capital. This much expansion of investment made it an elite education technology company in the world.

In 2012, Forbes listed 2U as one of the “10 Startups Changing the World”. In 2014, Inc. Magazine named 2U Inc. as one of the “10 Tech Companies Helping Humanity.” The company garnered much attention with Forbes’ list and mention of the company in several other business and education related magazines.

Currently, 2U Inc. is associated with 35 top colleges and universities and still counting to provide the world’s best online learning experiences. Some of the partnering Universities are:

“Most people thought we were a little, or a lot, crazy. But if we could succeed in channelling incredible universities, with their distinct and powerful freedom of thought, into this new digital transformation, we would build a very successful business.” ~ 2U Inc.

In this fast-moving era, evolving technologies and adaptation of e-learning concept has become a common concept as of now. When 2U started, it was definitely one of the most innovative and humanity serving ideas. But in past 4 to 5 years, the technology has received several innovations, the concept of e-learning and online study portal have been introduced, which have changed the whole game scenario for 2U Inc. Many companies are involved in developing technologies for making the access to e-learning easier for the students across the globe to conquer the battle of the number game, to make it differ from other. With the availability of several advanced and bigger players in the market, it is rather difficult for 2U Inc. to maintain its legacy. Some of them are John Wiley & Sons, Inc., Pearson PLC, Thomson Reuters Corporation, Blackboard, Brightstorm, eCollege, Grockit, Deltak, Review Adda, Udacity and so much more.

This is a long struggle in the industry to strive for their position over the long-term prospect in the changing market of technology. From the aspect of colleges and universities, it is advantageous for them, they are making money out of it. But on the other side, it is a major battle for such institutions. There are lots of other institutions who are also providing the same course at a comparatively less cost through correspondence. Despite the fact, 2U has a plus point that it has a relatively exuberant number of colleges and universities to which it is associated with. These college and university collaboration will lead 2U to perceivably ahead to next level.

Since online learning is striking its mainstream, people are using the medium to learn new things and enhance their skills. In the last 4 to 5 years, the development has been made at a rapid pace and e-learning revolutionised the entire industry. Now it is clear that in the coming years, the world will be thoroughly a new revulsion of the internet experience.

Now the concept of e-learning and distance learning program surely a new transmutation of the education. Moreover, day by day the involvement of the new technology and the business tycoons in this sector surely going to make it worth or it is the new beginning of the ruination of the education sector. Now it all is assumptions, future will describe all in coming years.

As the number game is on, on a high mode of competition, technology, innovations and several other parts of the industry. It will be interesting to observe the number game, who is providing, what is providing, how and most importantly their addition in the favour of the students and for them as well.