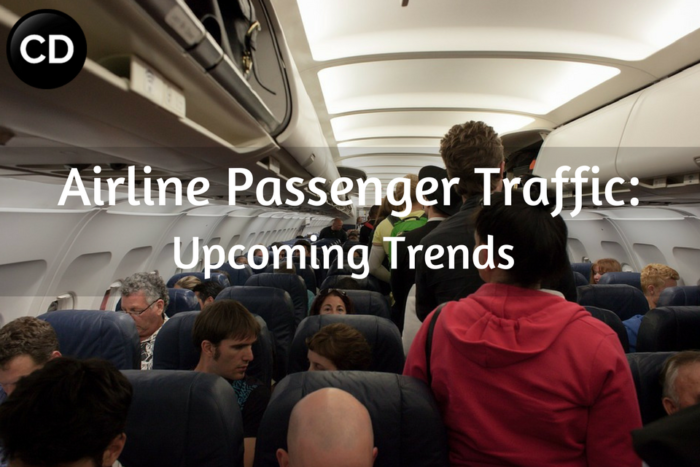 The international airline industry provides service to almost every part of the world and is an integral part of the world’s economy. The airline industry itself is a great economic force and also, it impacts different industries across the world. The most impacted industries are supposed to be manufacturing and tourism. Currently, at the global level, airline industry consists of over 2000 airlines that operate more than 23,000 aircraft with a service from more than 3700 airports. In the last one decade, the airline industry is observing a growth in the rate of airline passenger traffic approximately 7% y-o-y basis with substantial variations due to the global economy. According to Statista, total global revenue in the flights’ segment alone amounts close to USD 298,361 million in 2017 and revenue is expected to show an increase of 10.9% CAGR from 2017-21. In 2017, user penetration is 8.4% which will increase up to 10.4% in 2021. Currently, at a global level, average revenue per user amounts to USD 1027.02 and the maximum revenue is generated in USA (USD 102,512 million in 2017). The top countries in terms of revenue are: USA, China, UK, Germany, France.

The airline industry has been divided into four categories:

International: Consists of aircraft with more than 130 seats and can travel from one country to the other. Revenues: > 1 billion USD

National: These airlines seat 100-150 people and earn a revenue between 100 million- 1 billion USD.

Cargo: For the purpose of transporting goods.

In this report, we will be ignoring the section of cargo and will be studying commercial airlines passenger traffic.

The rise in international airline passenger traffic has been confirmed by International Air Traffic Association also and it stated that in 2015, there was an increase of 6.5% in the number of air passenger traffic. This has also been due to the decrease in airfares by approximately 5% as compared to 2014. Annual capacity has also risen by 5.6% resulting in an increase in load factor by 0.6 percentage points which is at a record annual high of 80.3%.

According to IATA, all the international and domestic regions experienced positive airline passenger traffic growth in the last two years where Asia Pacific region accounted for one-third of the total increase.

The statistic shows the number of scheduled airline passenger traffic handled by the airline industry globally from 2004 to 2017. Worldwide, commercial airlines carried around three billion passengers on scheduled flights in 2012. 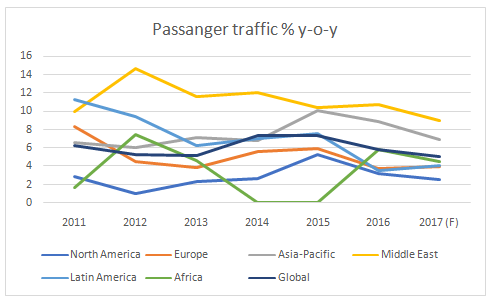 Airline passenger traffic capacity is one of the great measures to understand the performance of a region’s airlines. A positive growth in airline passenger traffic capacity is directly related to increase in the economic profit to the region’s airline industry. As has been shown in the above table, globally, there is continuous growth in the airline passenger traffic capacity. The maximum growth will be observed by the Middle East and Asia-Pacific. The reason is an increased industrialization in these regions. Africa also shows a great comeback in the year 2016 and which is expected to continue in 2017. It is quite clear that all the regions are going to be highly profitable for the airlines commercially and will prove to be improving the growth rate of the industry.

As is clear from the above figures, the global airlines’ industry is continuously growing and that too in all the reasons. However, the picture is not as colourful as it looks. The profit margins in the industry are not very strong. If compared to past one decade, the industry size has doubled from 369 billion USD in 2004 to 746 billion USD in 2014. This growth is the outcome of an increase in low-cost carriers on international routes and they control almost 25% of the global market. Emerging markets are also promoting these carriers and are contributing to the growth. Even after this, profit margins are actually less than 3%.

The industry has very low-profit margins which are as low as 3%. All the players in the airline industry- airports, airplane manufacturers, engine manufacturers, travel agents and service companies, all make a very small amount profit margin. The biggest struggle for any new market entrant is to break even. This is largely due to strict regulations internationally, airline accidents that happen very frequently and also the security concerns.

Competition among all the players in a respective vertical is increasing strongly. There is a great demand for low-fare carriers and economic airlines on international as well as domestic routes. This increased competition is actually decreasing the price of services and tickets for airline passenger traffic. However good to increase the number of travellers, it is one of the biggest reason of decreasing profitability in this industry even after continuous growth. Since 1950, airline yields i.e. average fare paid per passenger per kilometre has consistently decreased.

Increase in competition has increased expectations of passengers’ manifolds. Customer service sector of airlines industry has now become highly active and thus is costing much to the companies. This is one of the pain points, the reason being, customer experience is increasing but it is very difficult to upgrade the hard product except for the services provided to the airlines and airports. Cultural difference in international airlines also experiences this high expectation forum quite challenging.

Points to Focus for Greater Profits:

All the services and airlines in this industry need to focus on improvement in efficiency of operations. The most successful companies in this industry are those with strict cost control during all the operations. Also, it has been noticed that airlines can improve their efficiency from improving jet fuel efficiency. Modernizing of aircraft is one step towards it. However, buying a new aircraft is not an easy task and is on a very high-cost note. The companies need to trade off at some point and bring strategies to improve efficiency. Work practices are also given much importance by many companies in this industry since that can improve the cost-effective implementation heavily. Some of the flights have improved the efficiency by introducing additional prices for luggage apart from the seats and a passenger can select its baggage size according to his needs.

It is the time for the market to enter into certain consolidations. Industry’s low-profit margins are largely due to the existence of a large number of service providers in almost all the areas. US market has seen several mergers in the past few years and profitability ratio is increasing the region slowly.

Currently, as has been noticed from the above charts, the Middle East and Asia Pacific regions are among the most in-demand regions for the airline industry and are expected to show tremendous growth. The Middle East has seen a rapid growth with the advent of airlines such as Emirates, Etihad Airways and Qatar Airways and they are also eating a big slice of European international route airlines. Middle East market is more dependent on connecting flights on international routes since domestic market is not very strong owing to the small population. However, located in the middle of the world map, they have a great advantage and they are to the home majority of connecting flights and the whole world is almost within the reach of 8 hrs to them. This clearly means that the Middle East can easily capture the market on both the ends of the world.

As is true in other industries, understanding individual customers’ preferences and consumer-related activities is essential to delivering personalized service and targeted offerings. However, airlines must evolve beyond their reliance on existing loyalty programs, which can generate significant customer data (such as spending patterns through an airline-branded credit card) but don’t automatically lead to real insights about travel behaviour and choices. In most cases, carriers need to invest in more advanced customer analytics. And technology alone is not enough; airlines must also rewire their organization and processes to embed customer service into their organizational ethos. For example, at each point of interaction between the passenger and the airline — looking up flights, booking, check-in, boarding, and in-flight experiences — airlines can capture richer data about customers’ preferences, and constantly seek to exceed their expectations.

The benefits of greater customer knowledge and, hence, intimacy are an improved passenger experience and targeted offerings, such as proactive recommended flights to a passenger’s preferred destinations. As a result of such an approach, airlines gain a greater chance to generate ancillary revenue, and — through loyal customers — a higher percentage of sales coming through direct channels (rather than through online travel sites, which take a cut of revenue).

Airlines must also use new technology internally to streamline their operations and reduce costs. For example, systems that can enable real-time resource planning and allocation drive greater utilization. Tech-enabled engines can notify maintenance and operations centres of performance issues while an aircraft is still in the air, and request that a replacement part is waiting when it lands. Such measures can reduce downtime and greatly improve performance, driving down costs while also bolstering passenger satisfaction through more frequent on-time arrivals and departures.

Finally, because the legal frameworks of bankruptcy restructurings and consolidation in the United States are not applicable in most other markets, and government regulation will continue to limit much consolidation, airlines should continue to seek partnerships that can complement and even improve what they do best, as well as close glaring gaps. In most cases, these partnerships will be more targeted and synergistic than the traditional alliances that now dominate. Those alliances allow route sharing on a broad basis, but they aren’t tailored narrowly enough to allow airlines to strategically fill in specific gaps.

Qantas, which was already part of the one world alliance, recently forged such a targeted partnership with Emirates. Qantas did not have the traffic to fly profitably to multiple cities in Europe, yet that was a significant demand among its loyal customer base. Emirates, by contrast, had sufficient demand to access a large number of destinations in Europe, but it did not have a loyal base of local customers in Australia. The new partnership gives Qantas access to many more destinations in Europe, and it gives Emirates access to an extremely loyal base of customers.