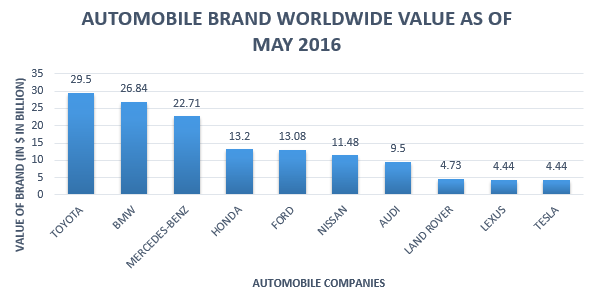 Automobile industry is ruled by Japanese, Germans and Americans. American brands like Chevrolet, Ford, and Cadillac are popular for their muscular and classic vehicles, German brands for high class vehicles. But Japanese car brands stand out from the crowd for their performance and design. Japanese automobile brand Toyota is dominating in automobile industry worldwide for the safety and quality they offer.

Toyota as most valuable brand

Toyota is the most valuable brand in the world with $29.5B in May 2016.  Toyota value in 2015 was $28.9B with an increase in brand value by 2.076% in 2016, Toyota remains on top of the list leaving behind many popular automobile brands. Toyota brand value in 2016 is 9.91% more compared to second most valuable automobile brand BMW. German automakers BMW and Mercedes-Benz are not far behind. BMW, Mercedes-Benz and Toyota all are present in every region in the world have no geographical advantage. Toyota offers wide range of vehicles – hatchback, sedans, luxury sedans, SUV’s, MUV’s, mini busses, trucks, hybrid cars etc. in more than 140 countries made Toyota the most valuable brand in automobile sector. American leading automobile brands like Chevrolet and Tesla fades to make worldwide presence making the brand less valuable.

Top selling cars in US

Toyota is the highest spending automobile company in Research & Development from 2007 to 2012. Toyota spending in R&D was much above than the companies from other sectors too. But Volkswagen changed the trend in 2013 by becoming the most spending company in R&D. In 2013 Volkswagen spend $13.5B in R&D, 5.2% of revenue making number 1 company to spend the maximum percentage of revenue in R&D. Toyota is not far behind and has second highest spending in R&D of 3.5% of total revenue.  Major portion of R&D of Japanese automaker Toyota goes in developing better safety measures and in hybrid & fuel cell vehicles.

Popularity of hybrid vehicle directly related to increase in gasoline price and strict in the environment rule for automobile companies in many countries such as Europe. To meet the need of hybrid technology in future, many companies are developing the new and emerging technology for their fleet. GM and Ford are working on hybrid version for their SUV’s. Toyota built RAV4 EV with Tesla after investing $50M in Tesla Motors. Germans are not losing in hybrid car market, BMW also launched their “i” series based on hybrid technology.

Why Toyota is so popular?

Toyota had its feet in every domain of automobile industry. Toyota offers product in every segment. Production line of Toyota include sedans, trucks, busses, SUV’s, MUV’s, luxury cars and hybrid cars to attract each and every targeted audience. Toyota is always concerned with innovative product. Toyota Prius and RAV4 are the great example for new innovation by Toyota. New technology let Toyota to engage with larger audience. Growth of Toyota is largely based on the presence in every nation of the world. In regions like US and Japan, Toyota’s share is much larger. In US even top American GM and Ford together are unable to compete with Toyota in the American market. Toyota is the best example of quality being such an important and necessary aspect. Toyota is not only dominating in many markets but also giving other automakers a direction to lead success in future.