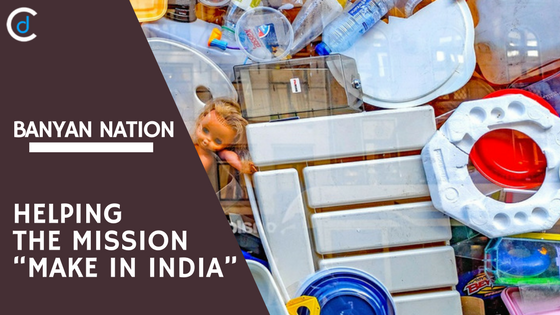 A plastic recycling and waste management based startup Banyan Nation a Hyderabadi startup, founded in 2013 by Mani Vajipeyajula, Raj Madangopal in Renewables & Environment sector. The thought of Banyan Nation evolved in 2013 during college time pursuing a degree in engineering, he was very well aware of the environmental crisis in India, such as the enormous amount of non-recycled plastic. With a thought in mind that India’s infrastructure & pollution need to be better so he decided to start Banyan Nation under the mentorship of a pioneer in the waste management circuit in the US, Ron Gonen.

Banyan Nation is changing the way India recycles, thinks about plastics, waste management and circular economy by harnessing the power of a largely informal sector last-mile collection and aggregation system to build one of India’s first formal recycling systems for post-consumer as well as post-industrial plastic waste. The company converts the collected waste into Better Plastic – near virgin quality recycled granules – that brands can use to make new products and packaging.

Banyan Nation is also one of the first companies in the country to use mobile and cloud technology and IoT to integrate over 1500 informal sector last mile collectors into its supply chain and trade materials with them. The platform has now been extended to help cash-strapped municipalities understand waste flows through their cities and use a data-centric approach to make waste management more efficient, effective, and economical.

The idea of waste management crossed the mind during the college time when the founder, Mani Kishore Vajipeyajula was pursuing MBA degree at Columbia Business School. Mani wanted to solve the problem of infrastructure & pollution, so he realised the fact that all the plastics were downcycled instead of recycling, except the water bottles.

Banyan Nation is a high technology-based social and innovative venture following the integrated approach of recycling & waste management. The Banyan Nation’s task starts right from the beginning like pre-sorting and collection to post-sorting and processing. The mission of the startup is to use the technology solutions to minimize environmental impacts to assist the source segregation and maximize landfill diversion.

“It is our mission to help brands sustainably ‘Make In India’ by replacing the use of virgin plastic with recycled plastic that is comparable in quality and performance. Within the next decade, almost all mainstream plastic products including food grade packaging will obtain recycled materials,” said Mani Kishore Vajipeyajula.

Funding and Investments of Banyan Nation:

A country like India, where plastic recycling is done in an informal way (illegally) mostly, and the cleaning is such in an unprofessional way that after recycling the material, it is hardly reused because the material lost the quality. Besides the fact that the demand for the recycled plastic in India is very low in comparison to Western markets now Banyan Nation is expecting a better waste management-space by the use of technology with the help of new government policies.

The startup gives on-demand and recurring recyclable waste free pickup services to townships, apartments, small and medium businesses. Banyan Nation has been a success in India despite the low demand for recycled plastic in India in comparison to Western countries. Whereas the startup has been successful in generating demand for Better Plastic and in attracting the leading corporations and the organisations, are using re-engineered plastic in packaging.

Banyan Nation got the accreditation from Tata Motors domestic giant in the automobile industry and French cosmetics company L’Oreal. Both the giants use the better quality of plastic in the packaging of the product and in auto components respectively. Tata Motors and L’Oreal helped the startup establishing its space on the global sustainability map. L’Oreal brought recapitulate plastic to use it for shampoo bottles, while Tata Motors used it in its car bumpers built by Banyan’s Better Plastic created from post-consumer and post-industrial waste streams from India.

“The platform has now been extended to help cash-strapped municipalities understand waste flows through their cities and use a data-centric approach to make waste management more efficient, effective, and economical,” according to Banyan Nation’s website.

Banyan Nation got the accreditation from Tata Motors domestic giant in the automobile industry and French cosmetics company L’Oreal. Both the giants use the better quality of plastic in the packaging of the product and in auto components respectively. Tata Motors and L’Oreal helped the startup establishing its space on the global sustainability map. L’Oreal brought recapitulate plastic to use it for shampoo bottles, while Tata Motors used it in its car bumpers built by Banyan’s Better Plastic created from post-consumer and post-industrial waste streams from India.

Banyan Nation honoured for “using data intelligence to integrate a largely informal supply chain to maximise plastics recovery and reuse”, a statement by Accenture, a co-sponsor of the awards.

At an early stage, founded in 2013, the Hyderabad-based startup was mentored by global private equity firm KKR. It has also partnered for waste management with the largest startup incubator of the country, T-Hub and with the Telangana government. The startup collects from post-consumer and post-industrial waste and converts it into “Better Plastic”, as good as virgin plastic, the startup claims.

“The app we created maps over 1,500 stationery recyclers. Data shows the amount of waste coming out and the local efficiencies in collection and transportation of the waste. We have mapped the kabadiwalas and integrated the supply chain,” Banyan Nation’s Founder explain.

Across the country, the need for a technology-driven waste management platform is in very high demand. The startup is willing to expand its operation of plastic recycling. The Banyan Nation’s model of waste management is very impacting across cities and states assuming the yearly waste of India.

“Governments spend hundreds of crores on waste management every year. But the entire data is offline,” said Mani Vajipeyajula.

Banyan Nation has developed the technology to solve the grief of the large-scale problem of Indian metro cities, due to rapid urbanisation. Through the waste management technology of the startup, we can easily tackle the issue and secure Indian developed smart cities in the very near future. Metro cities of India really need this kind of technology to tackle the serious problem. The government should also take initiative with the startup to promote the firm all over in India to solve the issue of the waste management.

“If you start envisioning the solution at a cluster level, and you deploy it in four cities situated at a distance of 100 Kms of each other at the same time; then the government will have patterns emerging around waste flows, material recovery, and resource recovery. This will, ultimately, lead to the formation of the right infrastructure and will attack the problem at its core. We are very hopeful because what was started as a back-end project has emerged out as a full-fledged solution for the cities,” said Mani.