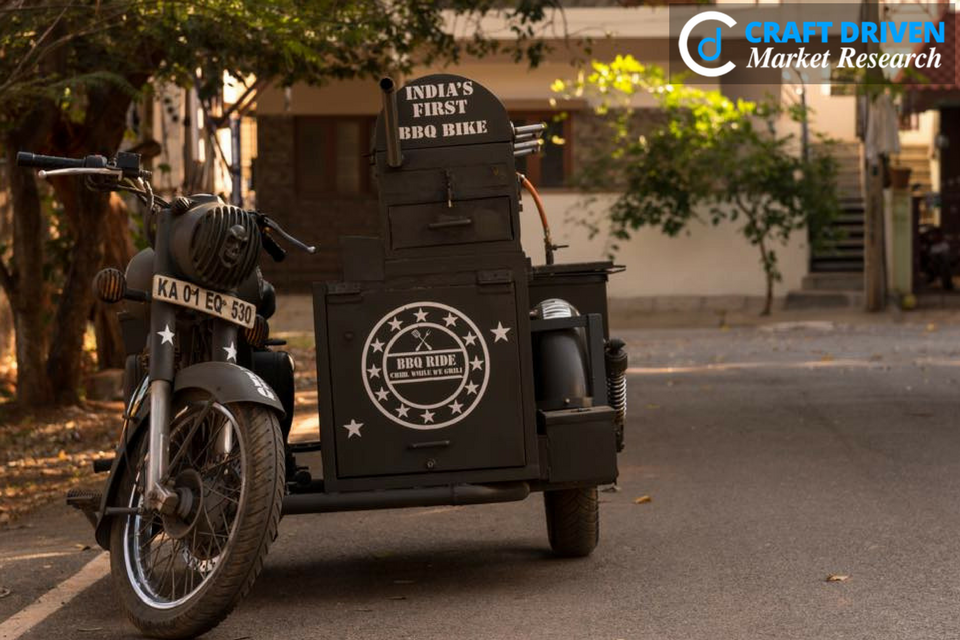 We always heard of various places famous for food or cuisines and fab barbeque at various places like street, outside malls and some any other places but never think of food riding on BBQ Bullet to reach you. Barbecue Bulleteer came up with the idea to serve the tasty barbeque cooked on a Royal Enfield Classic 500, fully customised. The BBQ Ride is a roll on wheels kind start-up, serving barbeque on moving ride. Well, this kind of start-up is a really unique and a great innovative idea, no one ever thought about this kind of use of Bullet bike in serving food.

The start-up was founded last year in October 2016, a Bangalore-based food bike start-up and just originated to generate some extra income while the founders were pursuing their college degree. The founder of BBQ Food Bike was the final years’ four student of Sindhi College of Commerce: Arun Varma, Krishna Kumar Varma; brother of Arun Varma, Manogna Chaudhary, and Syed Mujeeb and named the start-up as “Streety Treats”. They have now owned the patent for their Food Bike’s kitchen design. The idea to cook delighted grill food on a bike and serve the food by riding a bike. The concept of the start-up is not only a great impression on people (the customers) but also a novel way of business by accessing the food to the people.

Yet the idea is quite similar to the food trucks which stood at a place and people have to roam there, to get the food. But BBQ Ride changes the whole outline of food trucks and started the same in Royal Enfields instead of the giant truck and the BBQ easily ride the food to one to another place. They serve burger, sandwiches, barbecue and much more on it. To manage the space problem like to maximise the use in a minimum area they use Bike instead of giant food trucks.

Recently, BBQ Ride India raised the amount of Rs 10 lakhs funding from crowdsourcing. Before this, they owned three food trucks, a Tata Nano ‘ice-cream car’ in which they sell ice-cream and that also received a huge powerful response from Bangalorean foodies. The BBQ Bullet made their business reach the convenient places in Bangalore. The founders are very passionate about bikes and they also designed themselves their sidecar using in their bike. Formulating and implementing the idea of the sidecar to market using in such a way help them to cope up with the stress of parking the vehicle or finding a suitable place for their food trucks.

BBQ Ride now has the franchise in Hyderabad, Delhi, Chennai, Puducherry, Jaipur and Lucknow with 30 food bikes. Pune and Mumbai is the next targeted place to follow soon.

With 30 food-bikes, they now have franchisee-run operations in Hyderabad, Delhi, Chennai, Puducherry, Jaipur and Lucknow. Pune and Mumbai are to follow soon. A year before they just started with 2 food bikes serving chicken wings and pineapple wedges. But Know after a year the BBQ Ride is all set with his concept to launch in Central London by March, 2018.

“We will be launching in central London in March. An NRI businessman connected with us and the deal was finalised. We will stick to original namma flavours for the Londoners to experience,” said Arun Varma.

The food bikes have a sidecar that carries the storage unit, a gas stove with a 5kg cylinder, grill pan, two boxes of chef tools, makeshift tables, three boxes to store food and 15 kg meat and some dry ice to keep the meat fresh while shuttling and an attached garden umbrella. They also cater their services to the private parties hosted by CEOs and big name of the corporate, politicians, cricketers and more.

Londoners to eat out of a Royal Enfield food-bike thanks to this Indian startup read the full article here.

BBQ Ride has the biggest challenge of parking, where to park in minimum space and get the maximum out of it. Thus they decided to launch their food bikes instead of food trucks, the medium which they were earlier using. The challenge of parking in a minimum space and not to avoid any rules and regulation they invent self-made sidecar inspired by the very renown movie of Bollywood “Sholay”.

The founders were hugely inspired by the bike used in Sholay with sidecar. They created the same sidecar but instead of making it according to a use of person they utilise it in a storage for their work. As they prepared their sidecars themselves so they pay a special heed towards using it in a maximum way as possible.

The biggest challenge for BBQ is the “unhealthy food” what people think about the street food. To cope up with this challenge they have to prepare the food with quality and they have to keep the fact of quality in mind for future as well too.

“But we’re trying to change that, which is why we went with barbecue. It uses less oil, has plenty of nutrition and is healthy,” Varma explains.

The BBQ food bikes are so famous and became an essential part of the place where they are providing their services. BBQ Ride is gaining popularity among the big names in the market. The start-up gains so much popularity and gets success in their first year. But the main element is the taste of success will keep continuing tastier with the time? Will the founders’ teamwork lead the start-up to success and continue to work even better from today by keeping their quality and standard in their mind?

Well, this is just the beginning but the remaining part left to watch how far they can reach with their new outlet launch in London. As the concept is novel and they were implementing so well as of now and we hope the startup will keep the pace of getting success even high. We wish BBQ Ride a great success ahead, in overseas as well.