To What Extent we can Prevent Cyber Frauds: TrustCheckr 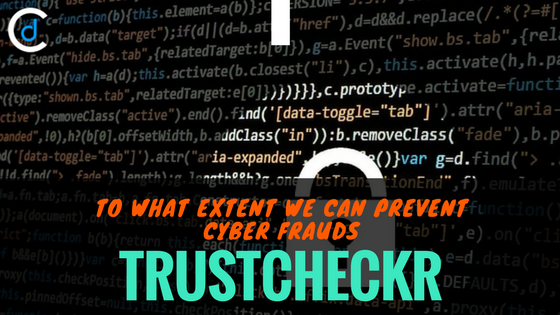 TrustCheckr, a Bengaluru-based startup co-founded by IIM-Lucknow graduate Adhip Ramesh and IIM-Calcutta alumnus Praveen Raj in 2017. A fraud analytics startup is a solution provider to the various businesses in helping them in the detection of fake profiles. The startup is empowering the businesses in getting insights of their customers by using social profile data, telephone operator data and other customers’ internal data. They use this data in procuring rust Score, Age, Gender and Income Level of the person which help them in distinguishing the FAKE profiles from their platform.

The startup is assisting companies in recognizing the fake, fraud or bot profiles by functioning image processing and artificial intelligence. The startup is also helping businesses in identifying toxic emails and gathering more information about their customers. In the process of collecting information of customers, the startup is taking the help of 15 or more public application programming interfaces (APIs), which includes Twitter, Facebook and Foursquare moreover with other date-paid and public sources.

The startup’s algorithm method utilizes machine learning, image processing and the capabilities of AI in developing a ‘trust score’ on the basis of the customer’s profile using certain factors, such as age, gender, interests and income range. The businesses can utilize the data by targeting the higher average revenue per users (ARPU).

The one-year one-month-old TrustCheckr has raised its fresh round of funding. The startup raised angel money $100,000 (INR 65 lakh) from a city-based conglomerate and two high net-worth individuals on Mar 12, 2018. The startup was also a part of global startup incubator NUMA Season 3 acceleration programme.

“The fresh capital will be used for hiring, marketing and product development,” said Adhip Ramesh.

Role of AI and Machine Learning in TrustCheckr:

The use of AI and Machine Learning is not a novel idea for fraud prevention but this can be used in enhancing the security across the various business sectors, including retail, dating and financial. More and more companies are transforming to the emerging technology, such as MasterCard, recently announced about their AI security platform. But the major challenge for TrustCheckr is building an in-house supervised machine learning team.

Fraud tactics from personal identity theft to malware, to phishing emails, to fictitious accounts, all the financial operations interconnected, such as linking buyers, sellers, service providers, and banks, etc. The weakest links attacked by the infiltrator systems and execute the fraudulent purchases or claims activity. Machine Learning and AI help in making real-time decisions, process data faster, learn the activity from new transactions thus help in making more accurate decisions that decrease false positives ( when the transaction of consumers considered as fraudulent by mistake).

Many e-commerce websites, such as Myntra, Jabong, Flipkart etc. faced lots of difficulties during the initial time, people using fake ids place orders at COD (cash on delivery) later at the time of delivery they denied the parcel and refuse to take it by saying we didn’t place any order. Same customers are now facing lots of websites are there where people place their orders and paid the money at the time of placing the order. Later on, at the time of delivery, there is no evidence of any site neither they get the delivery of the item nor they have any clue of the site.

Another major case in between the cab aggregator rivalry companies Ola and Uber. Ola defaming the Uber, tens of thousands of users who had booked and cancelled rides from Uber, the troublesome booking was made by the Ola was identity theft. Ola was misrepresenting the Ubers reviews in public and defaming its goodwill. To obstruct such activities it is required to have the fraud analytics to get the information and detail about the person using such malpractices.

Identity Check is the major point in detecting the identity theft by the frauds and can be used in fintech sector, e-commerce, retail; the matrimonial site along with dating app, recruiters, and reviewers (the rivalries putting the negative review on the competitors’ profile). TrustCheckrs’ solutions produce the relevant use cases in financial risk management, human resources and the sharing economy, according to their site. Whereas, TrustCheckr pay attention to the recruitment sector and matrimonial sites.

People want to be assured before indulging in any activity such as matrimonial sites could be a major market for the startup to target. In the matrimonial site, the fraud profile can easily recognise by the identity check and continuous check of the profile can easily identify. In such matrimony sites, profile identification plays a significant role; people believe if the enquiry can be done properly before considering any profile.

Recruitment is such a great burden for big companies where TrustCheckr can play an eminent role in the mass recruiting process of the companies, where the identity check of each people is a big task for the companies and sometimes they fail in managing it properly. If the startup could help such big companies in their recruiting then it would be more beneficial for the company to easily identify the candidate and its background correctly.

The fraud detection and prevention area are vast to cover and the demand for such fraud analytics is expected or even we can say will be the fastest emerging sector. The need for fraud analytics will be increased in each sector with the growing pace of technology.

1 thought on “To What Extent we can Prevent Cyber Frauds: TrustCheckr”