The European region is home to some of the world’s best and most established healthcare systems. In Europe, healthcare services are provided through a wide range of different systems run at individual national levels. The private sector is booming in the European healthcare industry as people are expecting more comforts, choice, and shorter waiting times. In most of the European countries have a system where government subsidies available for citizens compete with the private health insurance companies for those who can’t afford coverage.

Most of the European countries (and all European Union Countries) provides a European Health Insurance Card (EHIC) to their citizens. In the EU region, there are different rules apply to access treatment and emergency services in each country but with these European Health Insurance Card (EHIC) the EU citizen can avail emergency treatment within the EU. While people from outside the region will need to consider private health insurance so many employers in Europe provide health insurance to their international personnel.

The healthcare industry in the EU region has witnessed a significantly low market size due to the weak economic conditions in many countries, so the government decreased government expenditure. By 2020 the European healthcare market is expected to reach around €1897 billion from around €1867 billion in 2016. The spending of the EU stood at 9.6% of GDP, ranging from over 11% in France and Germany to less than 6% in Romania in 2017. Interestingly, the figure remained unchanged from the last two years as Europe’s health spending grew in line with the economy.

In 2018, physicians working on the front line are discontent and it has risen to an alarming level in Europe. More than 70% of physicians and surgeons in the EU region are unsatisfied with the MedTech manufacturers and pharma companies over the past two years. They warn that they are unprepared to cope up with the looming healthcare challenges, such as budget cuts, ageing equipment and inadequate facilities, staffing shortages, also with the ageing populations and the reemergence of infectious diseases. 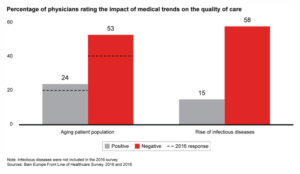 The European healthcare industry is in terrible need of change, but lacking a clear way forward, according to Bain & Company’s 2018 Europe Front Line of Healthcare Survey. MedTech manufacturers, pharma companies and hospitals are highly dependent on an outdated model of care delivery, which is operating under increasing pressure. The wave of bad to worse is increasingly striking in physicians’ attitudes. Two years ago, most physicians were broadly optimistic, though unsatisfied with the status quo, but they were considering that the new structures, systems and digital tools eventually would help them deliver better care at a lower cost in the future. But in 2018, that vision remains a distant goal. The healthcare organizations were highly in need of change but they are resistant to embrace new approaches to care delivery and the digital technologies that enable them across the EU. 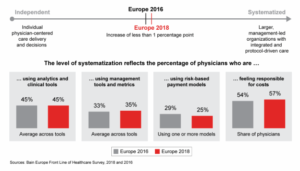 Ada Health is a German-based company founded by a team of doctors, scientists and engineers in 2011. It offers an AI-powered health platform which is providing help to millions of people around the world through understanding their health and navigates to the appropriate care. It is setting a new ground across medical reasoning and artificial intelligence with its innovative health technology to provide everyone quality, personalized health information and care in the world.

Ada Health has launched its conversational health companion app to empower people with personalized medical insights and identify appropriate next steps. Ada Health’s database covers thousands of symptoms and conditions, according to their website. Also, it claims 4 million people use its chatbot in 5 different languages, such as English, Spanish, Portuguese, German, and French.

Natural Cycles is a Sweden-based startup founded by Elina Berglund Scherwitzl in 2013. It is a contraceptive app that spearheads the development of digital contraception. The startup has claimed that women could use the app to plan pregnancies as it offers a fertility awareness smartphone app which will help women in family planning by just allowing the app stay on top of when they are fertile. It is certified as a contraception method both in Europe and the US.

Natural Cycles lessens the need for prolonged and manual tracking used in traditional methods of family planning, according to their website. The collected data help women in figuring out the average menstrual cycle length, cycle regularity, duration of the menstrual period, number of fertile and non-fertile days per cycle, variations in the ovulation period, and days with spotting.

Challenges for the European Healthcare Industry:

There are several challenges facing healthcare sector management and staff every day in Europe, such as the decrease in public expenditure in most European countries and the constant ageing of the population, hospitals and healthcare facilities, etc. One of the most important factors required is quality healthcare. Patients are highly demanding transparency in data and processes. The quality of care is an increasingly important part as patients are now more aware of their rights and begin to exercise how and with whom they engage for their healthcare.

The rising cost of the European healthcare industry is one of the major concern factors as the spending on healthcare almost invariably grows faster than GDP. During the current economically difficult times, it is expected to witness the rate of growth of healthcare spending in Europe outstrip GDP growth significantly. Both receivers and providers of healthcare are finding ageing populations or insufficient public funding highly challenging for them. In the EU region, there is a rising demand for healthcare delivery organizations. In OECD countries, the average life expectancy reached 80 years and continues to lengthen.

The number of doctors over 55 is among the highest in France in the OECD. In many countries, the highest number of clinicians per population will need to address graduate intake into medical schools, which is highly falling in real terms. In France, the number of doctors leaving the profession exceeding those entering it, an overall reduction was seen in the number of graduates emerging from medical school. This situation exhibits an ethical challenge as some countries seek to fill the gap by recruiting doctors and nurses from other countries, thus depriving those societies of their healthcare professionals.

Opportunities in the European Healthcare Industry:

In the European healthcare industry, there is a golden opportunity for private equity investors. PE players can significantly create value in the EU region. Where retail, automotive, etc. other industries have been transformed by competition and due to regulation, localised market dynamics, and high existing margins reducing the pressure to change the European healthcare industry lagged behind. Digitisation, efficiency initiatives, investment optimisation and portfolio rationalisation have sprung far more recently than elsewhere and there are various other works is still to be done. Private Equity firms can play a vital role here and can initiate transformation programmes, provide capital, facilitate consolidation and install tougher KPIs thus creating and capturing economies of scale.

According to McKinsey & Company’s report, “20 leading PE firms invested in European healthcare at the end of 2016, they were optimistic about its prospects: 76 per cent expect PE to be more prominent players in healthcare, while 64 per cent predicted healthcare would be a bigger part of their portfolios in future.”

If you would like to talk to us and discuss whether we can be a good team together, you can send a message to us here directly. We will reply to you within 24 working hours.