American motorcycle company Harley-Davidson repositioned the brand in 1980’s when the company went bankrupt, with more than $90 million debt. Banks refused to lend any amount to the company. Unique marketing technique and rebranding the company made Harley-Davidson one of the most successful motorcycle brand in the world. Targeting the market by producing quality products and improving customer relation regained the company’s reputation. Low performance and poor quality made customers to lose their interest. Rebranding the brand helped to change the working of Harley. After rebranding Harley is more inclined toward the quality than quantity. Pitching the customer as affording Harley-Davidson motorcycle is easy as making monthly payments that could not cost them more than a daily Starbucks. Attracting young buyers through rebranding saved them and helped to made profit. A great marketing strategy and rebranding of Harley made the brand successful and profitable.

Worldwide revenue of Harley increased for most of the time but the year 2009 received a drop of 23.145%. The loss in revenue is linked with the restructuring cost due to discontinuation of Buell Motorcycle Company. Buell was fully owned subsidiary of its parent company Harley. Larger portion of lost revenue was from US market. US market was the best for Harley to increase the revenue quickly. Harley decided to reduce the export by 5-10% and to sell more products in US market. 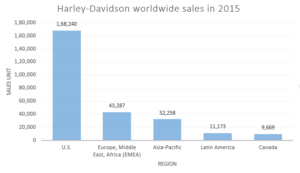 Harley-Davidson is more successful in US compared to other regions. Harley is the only major heavy weight motorcycles manufacturer in US. Out of total units sold in 2015 worldwide, 63.57% of units were sold only in US. In 2009, revenue was 53% in US and 12% in EMEA. 70.98% of revenue comes from US and 13.72% from EMEA regions in 2015. European market is next after US contributing larger portion in Harley-Davidson sales and revenue.

Average age of buying Harley-Davidson is 42 years. Despite being popular among young generation, average age of buyers is not decreasing rather it is increasing. European countries have high level of environment standards than US, satisfying all the norms might be difficult in Europe. International importing tax increases the price of bikes in many countries. Setting of assembly line helped to reduce the cost but not by a great factor.

Asian countries are less effected by global recession. Asian countries like India and China could be a great option for Harley to invest. Harley has a strong brand image and customization option in attracting many customers in Asian countries. Participating in all the major bike shows and rallies is another way Harley is engaging more and more customers and building the brand stronger among motorcycle enthusiasts.

Women and young generation is more attracted towards Harley but high price makes them to step back. Demand of Harley motorcycles is more than supply and long waiting period makes most of customer to buy Harley competitor brand bikes. Production of Harley bikes start after the order of customer.

Harley-Davidson should stick to the quality products. Harley is dominating in the US market and other markets in the heavy weight motorcycle segment. Production in Asian countries can make Harley-Davidson to reduce the price, making affordable for many customers. European countries is a potential market for Harley. Satisfying all the European environment norms will surely be a great revenue source for Harley-Davidson.