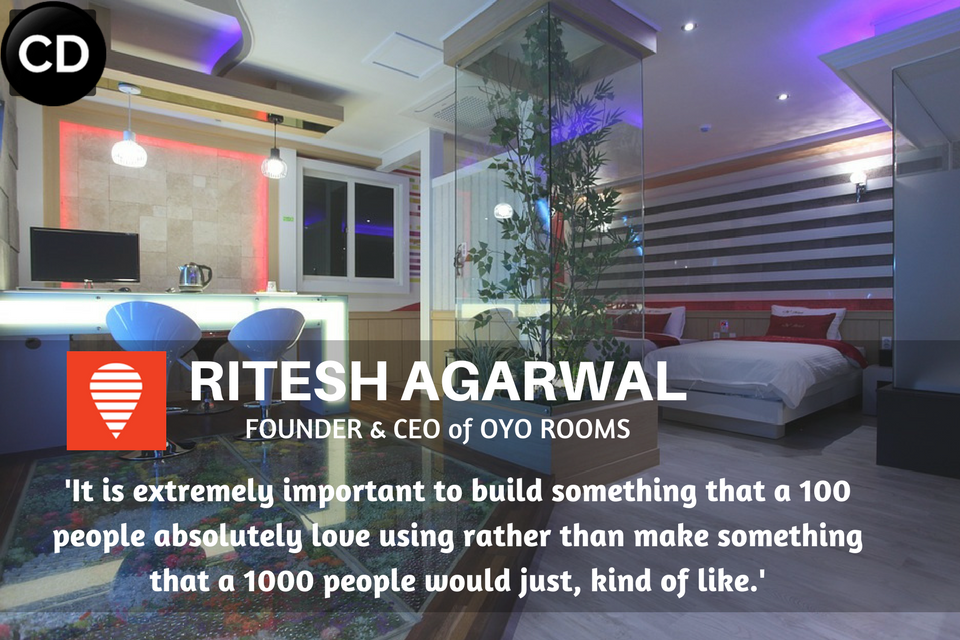 Ritesh Agarwal – the founder and CEO of OYO Rooms, one of the market leaders in the hospitality industry. He is among the top young entrepreneurs, a renowned name, the first Indian, who won the Thiel Fellowship, 2013. At 17, he introduced first entrepreneurial start-up, Oravel Stays Pvt. Ltd. His entrepreneurial stints are definitely an answer to him getting rewarded as one of the Forbes “30 Under 30” list in the consumer tech sector.

Ritesh founded his 1st company named Oravel Stays Pvt. Ltd. in the year 2012 later on which he modified into OYO (On Your Own) Rooms in 2013. Bringing Oyo Rooms into much competitive hospitality industry was one of its kind of challenge. It’s definitely interesting to know how Oyo Rooms actually evolved when there was competition from big hotel chains for luxury and business stay, several local hotels and stays for economic budget along with a large unorganised share of rooms and small hotels. Oyo Rooms can easily be termed as disruption of the hospitality industry while providing consumers with an easy to go solution for all their stay related challenges. It has to be noticed that Oyo Rooms not only took a great share of the hospitality industry but also impacted the economy in a great way.

Oyo Rooms are India’s biggest network approximately in 194 cities across in India with 6000+ hotels and more working on. Their aim is to provide hassle-free stay at matchless prices for extraordinary services, mainly focusing on the standardisation of services in the hospitality industry.

It is safe to say that Oyo Rooms was not and never a novel idea. It has been picked from other existing services in Western countries. Airbnb is one of the foremost most successful launches in this arena. Airbnb mostly has existence in USA, UK and Europe and Oyo Rooms is a beautiful derivation from Airbnb. Oyo Rooms is quite similar to Airbnb while preserving its differentiation to give it a way for a global platform. While Airbnb is a platform where anybody can be a member and provide a stay to the guests. That could be hotels, guest houses, stay rooms, individual rooms and the whole responsibility has to be borne by the host only. There is a rating system for the guests to be given to hosts and as per the rating, they attract the guests.

Oyo rooms preserved a lot from Airbnb and moulded the model in the Indian scenario. Indian market is definitely more volatile and complex and added to that, Indian culture is quite diverse and difficult to comprehend easily. Oyo Rooms early on understood the importance of branding since the start-up sector is evolving at such a high rate that it was quite easy for anybody to copy Oyo Rooms’ concept. Instead of allowing anybody to be a part of the platform, they joined hands only with the already existing hotels, guest houses and stay places since it was easy to authenticate them and assure their quality service. Oyo Rooms, on one hand, provided an additional business to them and on the other ensured its brand image through different measures.

If you enter any Oyo Rooms listed guest house, you will find a similar kind of aura around you with a brand name containing bed-sheets, towels, curtains etc. and this is enough to get a lead from their competitors. If a person stays in one of the Oyo Rooms enlisted property, he definitely can remember the name of the company and thus prove to be a returning customer. Here, in Oyo Rooms, unlike Airbnb, the company itself took the responsibility to provide quality service to the customers and they also have a rating system so that they can regularly get insights from the customers’ feedback.

Getting on the right nerves of Indian Hospitality Industry

Indian market is much different as compared to the Western markets if considered the discoverability of stay places. In Western countries, you may find it difficult to discover a number of stay places that fit into your budget, is safe and fulfils your requirement. Airbnb at a bigger note thus provides a platform where travellers can find a list of all the places with their pictures and services. However, the Indian market is quite different. If you enter any city for travelling, as soon as you exit from railway station/ airport/ bus stand, you find a number of people trying to sell you the services of places to stay. They are even ready to bargain. You might not need to search for a place online or compare their prices. But the major problem was the quality that they are providing. A large number of budget hotels are places which no person deserves to stay in and they are not safe. Oyo Rooms quickly understood the problem and worked on the root problem of the hospitality industry. In fact, sources have confirmed that a large number of hotels and stay places have been reformed after the entry of Oyo Rooms in the market.

So, who else is competing with Oyo Rooms?

With Oyo rooms, even after gaining quite a good market share, it is not going to be an easy road to become the market leader. Well, it is facing competition from several already existing big players in the market, some veteran players and some from other industries who are eating out its market share indirectly but quite vigorously. There are some direct competitors to Oyo Rooms which work in the same field of the hospitality industry and provide the same facility and second category is of Indirect competitors which are working in different sectors and providing many more services other than hospitality.

One of the similar ideas is that of Funstay which started in early 2015. The company has a simple goal of providing homestay accommodation to travellers, this group is a journey of 5 friends. Other companies like Fab hotel, Room on call, Stay Bazar, Vista Rooms, Trivago, and Treebo  all are in hospitality industry providing room services, house stay, apartments, villa and much more accommodations to traveler at a very reasonable price and providing the best service like Oyo Rooms and these are the direct competitors for Oyo Rooms.

Indirect competitors are mostly in travel and tourism industry such as Goibibo which is one of the leading company providing quick search, fast payments, settlement and booking air ticket, railway ticket and hotel booking. The reason for their survival is the large amounts of discounts and clubbing rewards which the customers receive on booking from them. Likewise, there are lots of big name such as Makemytrip, Yatra, Paytm and much more that not only provide hotel booking but also the flight booking facility and thus proving to be a comprehensive package for the customers.

Is it going to be a challenge to Oyo Room?

Looking at the current scenario it looks like the competition might become tough, the numbers game is going to be quite interesting as indirect competition may be the rank holder in this game. Indirect competitors are providing more convenience of booking at the same platform where they book the flights. In addition, coupons and deals in double booking prove to be a game-changer at this point. They are providing best facilities, focusing on quality and standardisation at a reasonable price with discount, who wants to go anywhere else when all the facilities are getting at one point. However, on the other hand, some customers are quite particular with what they are getting from where and Oyo Rooms can easily grab that share. Lots of challenges are there for Oyo Rooms and the most important and interesting thing will be watching Oyo Rooms to overcome all the obstacles.

It is definitely going to be exciting to see how the further journey of Oyo Rooms unfolds. It’s not been long enough for Oyo Rooms to be in the market yet it has been successful in creating a brand image and earn a significant amount of market share. It has already received the Most Promising Hotel Network, 2017 Award from Holiday IQ and is expected to earn several more accolades in the coming time with its strategic planning.