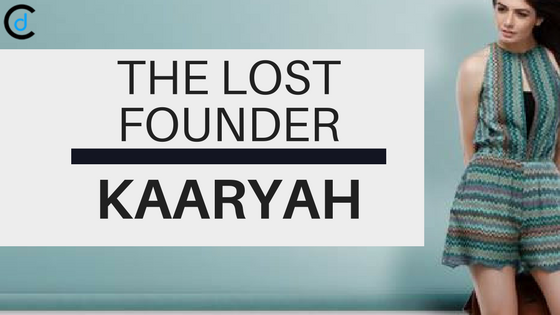 Gurugram-based startup Kaaryah designed and worked on providing office wear for women. The company was essentially a technology-enabled and data analytics-driven apparel brand that provided solutions to the women in relation to their appearance and lifestyle. The startup was providing a customised solution for Indian women with feminine, functional & fashion-forward wardrobe to them who mean business. The startup was dealing in non–casual wear providing the trendy western outfit that fits in 18+ sizes, at the doorstep.

What’s the impact of Kaaryah shut down?

As we always say, shut down of a start-up has a major loss to the employment. The shut also resulted in the loss of employment opportunity for the coming several years. In addition, it was definitely a pure loss for investors and the initial amount invested by the co-founders all got in vain. One of the reasons behind shut-down has been reported to be lack of funds with the company. The startup was working on fundraising and approached various investors in the last 18 months before shutting down. At last, the startup pulled the shutters.

Kaaryah had the workforce of around 50 to 60 people. According to Nidhi Agarwal, they had given a notice period of two months to all the employees of the startup. Some employees were referred elsewhere and given job placements outside in other companies. Still a loss of opportunity!

“It was not sudden. We have been trying to raise funds for the last 18 months. We had broken even twice in 30 months. Honestly, my aspiration for the brand was to take it to Rs 100 crore revenues within 4-5 years of having started it. It looked very realistic should we have received normal amounts of funding, given that we were a very capital efficient and working capital-light company,” said Nidhi Agarwal.

“…great workplace to enhance leadership skills, with the freedom to experiment & innovate…new opportunities are given to team members to help us grow & build cross-functional expertise as well…” an ex-employee

“…purchased one dress from kaaryah.com…product is nice…overall the site is simple and products are really up to the mark…” – a customer

“…6 days working…you will spend more than half your day in office…its not even an office…its a factory/warehouse…high attrition rate…you don’t get leaves and if you do manage to get a leave, people will call/message  for work…designers are blindly making clothes just to meet their targets…no importance given to quality or customer feedback…you get hired for a particular role but end up doing something completely different…hire more people and try to retain people…” an ex-employee

Though it’s difficult to analyse from the reviews on what happened with the start-up, but we can definitely say there are mixed reviews which is apparent for any start-up. The number of reviews are limited and do not direct to any particular reason.

The founder of the startup Kaaryah is now working as a startup consultant guiding the startups to build their own brands, who are passionate about their startups.

Was it lack of Proper Outlining?

In India, the professional wear is not a culture, a small percentage of women wear these professional dresses in offices. There are fewer companies which have western dressing as a norm and in majority if the companies, the women are still wearing semi formals, kurta-legging, suit, jeans-top, etc. other than formals. In addition, for formal clothing, women are not much aware of the fitting type and a common understanding is trousers and shirt makes up for the formal wearing.

Undoubtedly, Kaaryah grabbed the best segment of the apparel market of non-casual wear, which was not easily available in the market but the weak point is that the market for such specific professional clothing is very low. Not only the segment they targeted was already covered by the big market players, but the variety was also greater with other players. Kaaryah was providing 18+ fits to their customers. The point which they were targeting seemed great but owing to its small segment size might have proved fatal for the start-up and led to the shut down of the concept!

According to customer psychoanalysis, when a customer has multiple options to select among products, it makes them difficult to decide the right choice and the process of buying gets delayed. The confusion so created may not be applicable to the loyal customers but the ones that view multiple stores before buying the product, leading them to hold their buying process If a customer puts on hold then there will be a delay and more chances of the sale not happening. According to the business theories: More is the availability of options with the customer, more is the confusion; Less is the availability of a product, Higher are the chances for the customer to get satisfied and purchase it at the time.

Kaaryah was definitely a thoughtful but a risky venture and shutdown of such an ‘all-good-startup’ is a loss of the industry. The innovative strategy of Kaaryah probably backfired the startup and led it towards the shutdown. In addition, the concept was new to India where work wear was given due importance, however, a bunch of factors played together and led to the shut-down.

“The net sales of KAARYAH Lifestyle Solutions Pvt Ltd for the financial year 2015-16 was Rs 1.7 crore and loses were Rs 4 crore.”

The startup approached several investors for funding, but failed in getting the appropriate amount for scaling. It’s quite possible there was some mistake in their approach or something else was missing. We cannot clearly find a particular problem in their idea, company strategy, founder’s experience but it was one of those startups from which we can expect and it closed unexpectedly. The problems which might have occurred theoretically and practically could be because of the niche segment of the startup, where already big players were available in the market and were very well established.