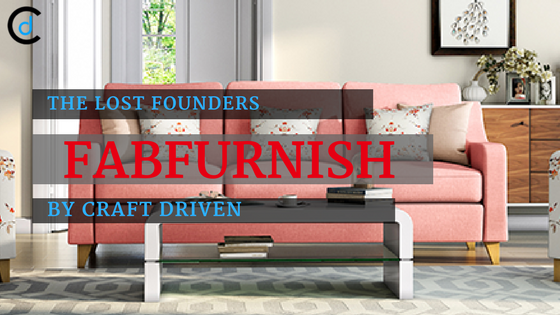 The Lost Founders: itself describing the whole theory of the startups and we are discussing Fabfurnish story today. Recalling me a statement that “90 per cent of startups that I see have no meaning at all. They are non-sense” Kishore Biyani said in The Economist India Summit, that shooked-up the whole start-up industry. Further, he added, “Most startups only want to sell themselves, and have no long-term plan”. The statement is getting to be true, in a manner after seeing the quick degradation of the Fabfurnish within a year or two.

The startup had a complete solution of home decor, diverse range of online furniture and homeware products. The year 2015 was an enthusiastic year for the start-up as it had revised all their current selling and marketing strategies into new one according to the market trend and evolved itself as a content-driven platform. Later on, in 2016 April, Future Group acquired Fabfurnish for $2.25 million totally in cash below the market valuation of the startup.

Every start-up’s commencement or termination, hugely impact the economic system of the country. The start-up’s termination hugely affected all the areas either in a way of employment, monetary or in terms of investors. According to Linkedin, there are total 173 employees working in the company officially which we can easily identify through LinkedIn but the workers who were working behind the brand like the carpenter, and the other several employees who get the work through such start-ups all lost their jobs. The investors who invested in the start-up with faith lost their trust and the biggest loss to the country’s economic growth.

Well if we saw an overall overview of the startup then there are lots of more question comes up to the mind, but we didn’t get the actual reason behind the failure nor the officials going to explain the reason. So we tried to find out some of the answers to our questions through our market research on Fabfurnish start-up.

So from above presented some review, clarified all the questions raised earlier.

Vaibhav Aggarwal quit the startup to run his own venture FabHotels.com in 2014. The other two co-founders also quit in 2015 and vanished from the industry, no information is available about their current status. It clearly shows that they had guessed the future of Fabfurnish and left it in the middle. This type of activities of the start-up breaks the trust of the investors and ventures to invest in a genuine start-up who really supposed to be needed the fund to take a further step ahead in the race.

Ankita Dabas Kohli was the new face of the Fabfusnish founders after quitting the two co-founders in 2015. She is running two start-ups, as a co-founder in Imperial Knots and Furnspace Pvt. Ltd. The original co-founders who were passionate about the start-up to work in a model and structure left the company in middle, later on, the new founder who had taken the hold was also in the same field and had the working knowledge which was very good but the passion for a start-up was gone with the FabFurnishs’ original founders. Fabfurnish is linked to Home Town a part of Future Group.

“Most startups only want to sell themselves, and have no long-term plan” the statement fits accurate here. The start-up’s tragic death briefs the improper planning and lack of setting proper strategies. The start-up derailed from the track, they lacked in market research, planning, strategy, etc. They are unable to satisfy their customers in many ways neither provided quality product nor assisted in providing better services to grievances. They didn’t execute any proper market research in the field and through the customers’ reviews; it’s clearly showing that they were not aware of the tiny facts regarding their particular business.

Why 75% of Startup companies fail to know more.

As the start-up was related to furniture, it is clearly expected from the company that they have already managed their operation towards repairing of the defective furniture or regarding changing the furniture. No doubt, replacing furniture is not an easy task and customer might demand it at free of cost in case the furniture is defective. However, this is a basic challenge for a furniture company and it is nothing that the management could not have thought of before. It would have been easier for the company if they had given a thought to such kind of challenges well before in time, simply writing this in their terms and conditions was never a good idea. If the reviews are to be observed, it is quite clear that the company management terribly failed to provide solutions to such issues. Also, the company did not learn even after hundreds of customers giving this as a major cause of concern for buying products from the company. “Customer is the King” if only Fabfurnish could have understood it in its time!

Our take on the whole scenario is that Fabfurnish failed to get a proper understanding of its industry. It could not foresee the challenges that were most common and thus could not devise a proper plan to satisfy its customers in due time. Lack of long-term business is a sure shot signal towards an ending business. Market research, competitor analysis, understanding of challenges within the industry, customer demands and requirements, psychoanalysis of the customers and market trends are some of the most important aspects of the business that are most important to be studied well before entering into any industry. A vague entry to the market probably drove the Future group to at last deny representing Fabfurnish as their brand.