The Unconventional Industry: Musical.ly – An Open Platform for Artists to Showcase their Talent 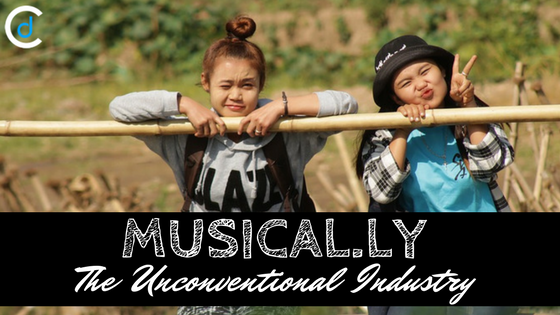 Musical.ly the very first story about which we are going to discuss in “The Unconventional Industry”. Millions of people using musical.ly which is now known as “TikTok” to express their talent, humour and it is a new platform for discovering a brand new world of original entertainment content sharing the same interest with an engaged global community. Musical.ly, a US-based lip-syncing video application, co-founded by Alex (June) Zhu, Luyu Yang in 2014.

Musical.ly – A Planned or An Unplanned App:

The story behind the Musical.ly music-video app is a live example of zeal to do something different for others. Musical.ly was not the original concept of the co-founders, Zhu always interested in education also earned the title of “education futurist” when he was working as a project manager in a software enterprise. The whole idea of the founders was to create educational videos in short-form. In 2014 the co-founder became successful in raising $250,000 funds from venture capitalists. They start making short videos of three to five minutes on a subject explaining it. They spent almost 6 months in developing the Cicada app.

“The day we released this application to the market we realized it was never going to take off. It was doomed to be a failure,” said Zhu.

The major task for the lesson planners had to sum up their expertise in just three minutes. So the team missed the chance when they realized that the short video creation took too long to create within the decided time. Now they had also got to know that they had to sum up the needed content creation and consumption within some minutes and seconds, not in hours. And the main question appears that the educational videos weren’t entertaining so how would it attract teenagers.

Now at that point, the Zhu team had only 8% of the money left of the total raised amount. Now the team decided instead of returning the remaining amount to the investors and walking away, they struggled to bring a new idea.

The idea came up when Zhu watched a noisy young teenagers group in a train, he noticed that the half of the teenagers were taking selfies, making videos covering them with stickers and sharing it with friends on social media platforms while another half of them listening to music. A novel idea to innovate technology in a distinct way came up with a whole new twist to the conventional ideas of the music and videos creators. They develop a lip-syncing app named Musical.ly (TikTok) in which they completely make an innovative fusion of music, videos to attract the teenagers demographic.

A 15 seconds video is an ideal one to gain the attention of the teenagers. The video through which they can easily form laugh and narrate a story without losing the interest of the teenagers. The video is an excellent combination of various different ingredients mix up like teenage boys thumping their chests to a song, to gymnastics routines set to music, to acting out funny lyrics from songs. Within 30 days the Zhu’s team turned the idea into the app and launched it in July 2014. This is how the musical.ly got the start.

“Today the very proposition of the app is not about creating music videos. It’s not about lip-syncing. It’s about a social network. It’s a community. People want to stay because there are other people,” said Zhu.

People are passionate about comedy to music, beauty, sports, animals, fashion, and more, where everything is available at one stop. Musical.ly (TikTok) has raised total funding of $146.9M from three rounds of investments. Right from the beginning, they attracted several big market players to invest in the startup.

On 19 Dec 2017, Musical.ly announced that the company is going to invest up to $50 million this TikTok Creator Fund to support Musers, its users. In the next 2 years, TikTok Creator Fund of Musical.ly will be used for college scholarships, a “creator marketplace,” and co-development deals including individual video creators and media partners on new formats.

“Our vision is to inspire the world to create, and we’re excited to offer our users the ability to express their creativity, advance their talents, and even make a living on Musical.ly. From everyday creators to established influencers, our users make Musical.ly a dynamic and entertaining video community for millions of people around the world,” said Zhu.

Musical.ly approx 500 people were downloading it in a single day, and the most important they were kept coming back to the platform. In the next 10 months, the app was gaining the popularity and kept growing but the growth was too slow to save the company.

“We got nervous. What do we do? We didn’t have much cash left. Sometimes quick failure, like that education app, is good because you can turn around other ideas quickly. But having this slow growth is bad, you don’t know if it will take off or not and you’ve invested a lot of time into it,” said Zhu.

They analyzed that when people were sharing their music videos, the logo of Musical.ly (TikTok) was cropped out on Twitter, Instagram, etc. In April 2015, they fixed the moving of the logo in the videos and repositioned it. Some few small changes in design tweaks to the app, etc the path of the success got easy for Musical.ly (TikTok) videos. Later on within 2 months, the app hit the number one position in the iTunes app store over 20 countries, including the U.S., U.K., Canada, Germany, Brazil, and Japan, etc.

“Now that I look back, I think the initial slow growth was actually a good thing. We got lucky because we had time to build the product, to make it ready, to build every feature around the community. If the growth came too early, it would probably just stay as a fad,” said Zhu.

They decide to make it the next social network for the community to revolve around videos instead of making it like, Vine or Dubsmash, etc. any other lip-synching video app. The app has 200 million users flocking and continues to grow globally. The app ranked at 7th in TIME’s 25 Best Apps of the Year for 2017 and also received the Wall Street Journal’s 2017 Innovators Award.

Musical.ly had launched four years ago and now has more than 215 million users in its lip-syncing and short-video app platform. Also, it has a sister app for live-streaming video, Live.ly. Its competitors in the market are Animoto, Magisto, Slidely, Videolicious, Viddyad, Directr, Storyvine, Flipagram, RecordGram, WeHeartIt, etc. Musical.ly has been purchased by a Chinese news firm Bytedance for as much as $1 billion.

It is a great unique platform which people are loving the platform because it is distinct from various other social media platforms like, Whatsapp, Twitter, Instagram, Snapchat, etc. Musical.ly (TikTok) is providing a platform to various artists over worldwide, it is an open platform for all to showcase your talent. The platform has already made so many stars, such as 13-year-old twins from Germany, Lisa and Lena, Baby Ariel, Jacob Sartorius, Loren Gray, Cameron Dallas, Kristen Hancher, Jojo Siwa, Kira Kosarin, etc. several others. It’s a platform to gain popularity at the global level, people want to become popular and this is a good platform.

Other than Facebook, YouTube, etc it is a new platform to gain popularity. There’s a chance of Musical.ly (TikTok) to become more popular in the near future than now as the open platform is providing to the artists and the artists are grabbing the chance to become popular.