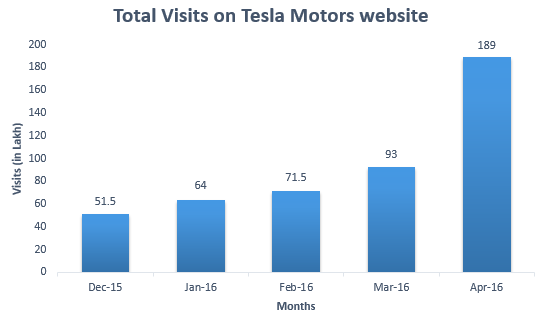 With a futuristic innovation, Tesla is all set to drive the world’s transition to electric vehicles. Most of the companies are using electricity to improve the gas mileage, but Tesla Motors achieved success in United State and other countries with Electric vehicles without any other source of powertrain. Tesla model ranges from full sized crossover, luxury sedan to sports car with starting price of $35000. Tesla offer pure electric propulsion technology, rages beyond 200 miles for all the models. Tesla initially introduced a sports car Tesla Roadster, high-end product and subsequently moving to more affordable family cars. Tesla Motors did not only focussed on selling their own vehicles but also sell powertrain components to other automakers.

Based on the number of visits on Tesla Motors website, popularity has grown more than 350% from 51.5 Lakh visits in December 2015 to 189 Lakh visits in April 2016. Total visits on Tesla Motor website on a span on 5 months are 469 Lakh. Average page view on the website is 5.51 pages and average bounce rate (Percentage of visitors who leave the page without viewing the second page) is 37.24%, which is considered to be very good from the average acceptable bounce rate of around 50%-55.Average time of visit on the website is 4 minutes and 17 second compared to good time of 2 minutes which depicts that the credibly of information provided by the website is highly informative and interest-worthy.

Major portion of website comes from United State clearly states that Tesla Motors had its hand in a right way on the United State market, more focussed in California state or nearby area. A survey conducted by the Union of Concerned Scientists in April 2016 shows that in 9 states including Connecticut, Maine, Massachusetts, New Hampshire, Rhode Island, Vermont, New Jersey, New York, and Pennsylvania, 35% of drivers are interested in buying or leasing their next vehicle as an electric vehicle.

Tesla Motors has a competitive advantage over others as they introduced not only charging stations but free of cost, super-charging stations that can charge the Tesla car around 80% within 40 minutes. Low cost of Tesla’s battery pack allows Tesla to sell Model S at a very competitive price with a range of around 300 miles, which other manufactures like Chevrolet are not able to achieve. Tesla Motors is the first successful automobile start-up to provide pure electric performance car (Tesla Roadster) and pure electric premium car (Tesla Model S).

Tesla motors entered into the world of automobile industry with high-end performance car Tesla Roadster with base price of $109,000. They matured the brand name in the US market with the pure electric performance car, later they moved on lower segment cars Model S at a base price of $57,400 and Model 3 at base price of $35,000. Tesla sell cars directly to the customer without any agents or independently owned dealerships. Tesla showroom acts as an information stores where customers can get all the information about Tesla Motors and Tesla cars.

GM Chevrolet Bolt is the biggest competitor of Tesla as GM Bolt is the only car offering pure electric vehicle with range of more than 200miles. Tesla still has an edge in pure electric vehicles as Tesla is providing facility of free of cost supercharging station in US, Europe and in some parts of Asia. Tesla has 641 supercharger stations with 3844 superchargers in North America, Europe and Asia, to make sure no Tesla car goes out of charge. Tesla customers can locate all the nearby charging stations on the informative display and can track the charging of their vehicle through Tesla App.

With continuous growth of Tesla Motors, they are trying to capture more share of automobile market by introducing more and more free supercharging stations. Luxury cars at low running cost, zero-emission vehicle and availability of supercharging stations that can charge around 80% within 40minutes, with no wait-time. Tesla’s strategy of introducing high-end performance car as their first vehicle helps to grab the attention of large population. Tesla motors should target the countries with huge population. Availability of number of supercharging stations is the major factor behind the growth of Tesla Motors in a span of 13-14 years.