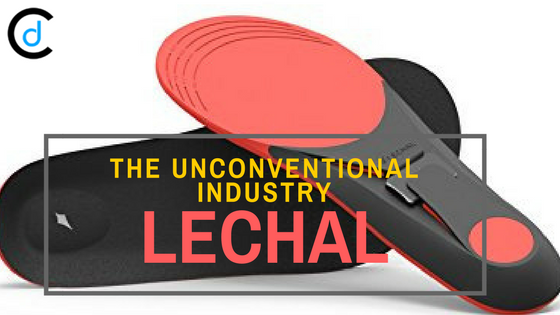 In today’s edition of “The Unconventional Industry”, the story is about the haptic (pertaining to the sense of touch) shoe for the blind and visually impaired people helping them in simplifying their daily life struggle. Lechal is the world’s first interactive, haptic footwear receiving signals from the GPS-enabled smartphone, giving directions and alerting about the obstacles. Let’s know about the Lechal’s journey making life better for the blind and visually impaired people by designing the haptic shoe line helping them to navigate easily.

“I used to see visually impaired people daily in Koramangala, where I lived. One night, while starting at a new pair of Reebok shoes in my room, I thought, ‘Hum inhen chalate hain, kya ye humen chala sakte hain? (We make them walk; can they make us walk?)’ It struck me that it was possible if we could put sensors on the shoes along with four or more vibrators, each vibrating to indicate the direction in which one should walk,” – Anirudh Sharma.

From there the idea of haptic shoe took root in Anirudh’s mind, so from the very next moment, he started executing his idea of making the haptic shoe for the blinds and visually impaired persons from his room. He disassembled his android phone and took out the vibrator, then arranged LilyPad, a wearable microcontroller. He assembled them and wrote a small code with the help of Google App Inventor and there he conducted his first successful demo. In 2012, he met Krispian Lawrence, an American Patent Lawyer through a common source. With the help of Lawrence, he patented his innovative technology. Later on, Anirudh Sharma and Krispian Lawrence co-founded Ducere Technologies in April 2012 in Secunderabad, Andhra Pradesh.

The Lechal haptic shoes assist the movements of blind and visually impaired persons. The shoes making technology contain an electronic module that comprises a chip, a vibrator piece and rechargeable and removable battery. The shoe will guide the user to the desired place by suggesting them about the turns. A left turn or right would indicate by that particular side of the shoe through the vibration sensor. The haptic shoe has four vibration actuators on each side of the shoe and it only works with the help of a smartphone as of now. But the company is trying to modify it and developing the technology enabling interaction using via a simple phone.

The user can input their voice about feeding the destination place on their smartphone, and then the phone interacts via GPS to Open Street Maps and provides the direction to the device in the shoe. All the activity between the smartphone and the device inside the shoe is a totally wireless connection. The person needs to walk in the direction indicated by the vibrating actuator – the right side vibrator indicates a right turn and the front one indicate walking straight. The haptic shoe also informed about the obstacles as far as three metres. But what if the user wants to follow the path they take every day instead of going with the one indicated by the GPS system, then it is difficult to notify about each obstruction, as we all are very well aware of Indian roads.

The shoe design is so interesting and the plus point is it is attracting non-blind customers as well. The company has also designed Polyurethane insoles that can be used in any other shoes too and also used to record the number of steps taken in a whole day and how much calories burnt in a day, the shoe is playing the role as a fitness tracker.

Insole dubbed SuperShoes including three actuators, a touchpad at the toes and a microprocessor developed by Dhairya Dand of MIT’s Media Lab. The shoes work with the help of an app on a smartphone via Bluetooth. This is another venture in the haptic footwear industry. Some other companies associated in the field putting processing power into the shoes but not involved in haptics. GTX Corp.’s the FCC certified GPS-enabled shoes. The shoes enabled with a tracker in it, tracking the shoe wearer via a phone app and alert them if they roamed before reaching a pre-set area.

Another in the same field is The KTH Royal Institute of Technology in Stockholm, Sweden, who has been working on the heel of a firefighter’s boot by putting a microprocessor and sensors, which would work in combine form with a wireless unit to trace the emergency worker. This will also work in the underground condition where GPS might fail to work. The Fraunhofer Institute for Photonic Microsystems has a shoe that consists a microcontroller, accelerometer, GPS sensor, radio frequency module and a battery to communicate the information concerning the runner’s form and technique with the smartphone app.

Lechal is now 110 people team from a 2 member’s team. In 2013, Lechal had also raised $2 million in angel funding and from May 2015, the company started shipping their product. Prior to that, the company had also received 50,000 pre-orders from 145 countries. In India, the journey of the startup was not easy for being a hardware startup. The founders also feel challenging in the development of the product due to various geographical constraints. Finding the right vendors was a tough challenge foe Lechal at time of inception.

“The R&D phase was a huge learning experience because there aren’t a lot of avenues for innovative product development in India. We were also an unknown entity, so setting up business partnerships was challenging,” says the founder. Further, they added “But over time, as our media profile increased, a lot of things settled down. The higher profile also brought more like-minded individuals to us, rather than us looking for them.”

The company was a bootstrapping before they raised the angel round funding and was maintaining all their expenses itself through product sales via their own portal and distribution partners globally. They also made the partnership with few organizations that were working with the visually-challenged. The year 2015 was a turning point for Lechal When the company showcased at the global stage for innovation – International Consumer Electronics Show (International CES) in Las Vegas, United States and received a remarkable response.

Lechal company wants to expand organically aimed to be online and offline stores in India, the Middle East, US, UK, Australasia and Europe. According to WHO, around 285 million visually-impaired people are there in the world and most people being in India. Globally the demand for smart fitness tech is very huge. According to a report of Mobility research company CCSInsight 411 million smart wearable devices, a tremendous of $34 billion will be sold by 2020.

“Interest in wearable technology is particularly high in India among consumers less than 35 years old, and that’s a huge section of a very, very large population. More than 70% of early adopters have evinced interest in buying functionality for everything from navigation to personal safety to health and fitness. For these consumers, wearable technology crystallizes a completely connected lifestyle.” said the team.