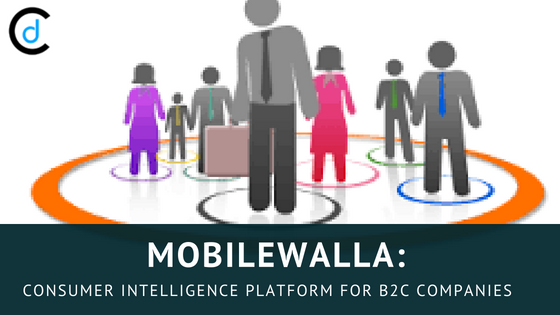 Mobilewalla, Inc. is a next-generation consumer data company that develops tracking and interpreting consumer behaviour platform on mobile phones. New York-based company founded in 2008 by Anindya Datta and Jay Clark, now it has additional offices in other countries such as in Atlanta, Australia, India, Indonesia, Malaysia, New York, Seattle and Singapore. Mobilewalla, Inc. was formerly known as Wordster, Inc.

It is an early player in the field of app search and discovery industry working on the big data, artificial intelligence and machine learning technology with aiming to provide the world’s best granular consumer intelligence platform to B2C companies in getting demographic, behavioural and systems-usage information. The company has claimed of having encompassed information of 1.3 billion consumers in 31 diverse countries in telecommunications, retail, FMCG, financial services and market research sectors.

Post selling his previous startup Chutney in 2005, Anindya spent some years with his six-year-old daughter, who was quite obsessive about one particular game on her iPod. Anindya’s daughter and her particular game is the reason behind the concept of Mobilewalla.

“This was the time when apps were starting to take off, and there were around 800 apps on the iTunes store. This made me dig deeper and I found that native search for the app store was quite bad,” said Anindya.

With this Anindya built an app discovery and search engine on the basis of Semantic Search which helps the users in searching apps. The beginning of Mobilewalla was his quest to build the third-party search engine for apps and at the same time, it was not a proper business. With this, they were becoming popular but also they were depleting fast in terms of the financial resources.

“So I realised that as we were doing a lot of semantic searches, and it’s 2010, people are now accepting apps. So, I thought why can’t we make something which can help a company reach its audience on mobile better based on how he or she is using the apps on his smartphone,” told Anindya.

Although Anindya is operating in the US for years, still he is an Indian through his heart, and it is reflecting from his startup’s name; Chutney and Mobilwalla. Mobilewalla was earlier planned to name as Appwalla but the domain name was already taken, so he had to settle with MobileWalla.com.

Indian Angel Network (IAN) backed Mobilewalla during its early days. Now the company monetising through its subscription model based on DaaS services and with its audience targeting and segmentation service as well.

Achievement and Innovation of Mobilewalla:

Mobilewalla is all set to cover Indian market now. It is the only mobile data provider at a global level time-based analysing the location and app usage. It’s customised and syndicated segment of audience allow clients to engage with their consumers’ passions. Mobilewalla’s clients are agencies like Mindshare, MEC, M&C Saatchi and Fetch, as well as including the major global brands Unilever, Starbucks, Nokia and Ford, etc. use this to engage with consumers’ passions. In 2014, Mobile Marketing Association’s Smarties APAC awarded Mobilewalla the Best Enabling Technology of the Year in Mobile.

“Our platform enables agencies to successfully analyse, interpret, and activate vast amounts of consumer profiles based on mobile data. Our database gives advertisers a robust and clear picture of consumer patterns based on real-life activity. We also harness location and behaviour-based data to understand consumers and recognise where individuals are in their life journey. User information is collected from a variety of sources so advertisers can engage consumers who are ready to buy and develop compelling advertising campaigns that speak directly to their best customers,” says Anindya.

PlaceIQ is Mobilewalla’s number one competitor; it operates in Advertising & Marketing industry. Other top contenders for Mobilewalla is SITO Mobile which operates in the Internet Software industry, Factual operates in the IT Consulting industry, Placed, PushSpring, Near.in, Chartboost, etc. Globally, the company has consumer data companies like Neilson, Gartner, IMRB, Grail, etc. amidst other players excel in providing demographic information across different geographies as well as over web.

“We don’t do what Neilson or Comscore might be doing. If you need to reach women aged between 18-35 in India, we will give you an audience segment, say of 6.5 million devices which belong to this particular age group. You can take it and then with the help of companies like InMobi, can push data as per the need of your campaign,” said Anindya.

The biggest challenge for the company is the data storage. According to Anindya, they receive about 25 Bn ad requests every day. 25 Bn ad requests per day which 4KB is the size of each ad request. Every day 100 Terabyte worth of raw data in total which needs to store data over a period of time, approx 2 years, totals to 1.5 Hexabyte. Another point is to analyse the percentage of error down from the data analysis based on statistical and probabilistic measures is a major task for Mobilewalla.

“Amazon Web Services today has the storage capacity of 15 Hexabytes. If we store this data there, it will consume 10% of their storage and our data storage bill will alone shoot up to $5 Bn. This is not economically viable,” shared Anindya.

According to the industry experts, India is expected to witness an eight-fold jump in its current $2 billion big data analytics market to reach $16 billion by 2025. The Indian marketing analytics industry has fastened and its annual revenue is around $2.03 billion and it is expected to grow 23.8% by 2020 at CAGR.