2012 to 2016 was a period where the construction industry registered positive growth. The global financial crisis impacted the growth of the industry and despite this; the industry registered a modest performance which is supported by the government to stabilize the economy, investments of the public sector in residential projects and industrial activity. In 2016, the industry’s output value term rose at a compound annual growth rate (CAGR) of 3.75%. In 2017, the Singapore construction industry’s performance was quite low and in 2018, GDP from construction in Singapore expanded from US$ 3076.70 Million (4182.20 SGD Million) in the third quarter of 2018 to US$ 3115.10 Million (4234.40 SGD Million) in the fourth quarter.

2016 was the year for the construction industry and an all-time high record of US$ 3733.57 Million (5075.10 SGD Million) was recorded in the second quarter of 2016, and an all-time low was recorded in the first quarter of 1975 US$ 374.38Million (508.90 SGD Million). Singapore’s construction industry’s output continued to shrink in 2018, after a poor performance in 2017, this is due to the restrained activity in public and private building projects and an ample supply of previously completed private housing projects and offices.

In Singapore, public housing is managed by the Housing and Development Board (HDB) under temporary leaseholds for 99 years only. Residential housing in Singapore is majorly governed and developed publicly. 3,247,500 resident population, which is 82%, live in such lease accommodation provided by the HDB; drop from 87% peak in 1988-1990, according to HDB Annual Report 2018. Non-residents are not allowed to own these HDB apartments but if the apartment is owned by their resident spouse can live.

In 2017 the private residential construction demand improved moderately from the $3 billion and in 2018 it was between $3.0 billion and $3.6 billion. In 2017, Singapore’s property market has developing signs of improved market sentiments as evidenced by the higher take-up rate in new launches and the surge in en-bloc deals. In 2019, the demand for the private sector’s construction is expected to remain constant between US$ 7.72 Billion (S$ 10.5 Billion) to US$ 9.18 Billion (S$ 12.5 Billion); supported by the projects including new industrial development and the redevelopment of past en-bloc sales sites concluded prior to the second half of 2018.

The price performance gap between private condominiums and HDB apartments is expected to keep growing as the decline was recorded. Buyers are leaving their apartments before 99-year leases expire and in some cases, they left in 40 years. The below-given chart compares private and public housing price indexes.

On the commercial front, all the activities in this sector will continue to be muted except the Central Boulevard Site. According to the records of tourist arrivals and tourist spending in 2017, some of the major hotels and retail malls may undergo major asset enhancement initiatives & improvement works this year. The news about the multi-million Formula One Grand Prix is to be held in Singapore for another 5 years may further spur up the tourism market in Singapore. Commercial properties for collective sale may also pick up the pace. Demand for the commercial space driven by multinational corporations is expected to be increased as the economic prospects of the market has improved. In 2019 the demand is expected to increase steadily between $2.6 billion and $3.2 billion.

PlanGrid is a mobile construction management software startup providing cloud-based construction document collaboration platform that allows plans, markups, photos, and reports to be instantaneously shared with everyone on a construction project. It provides a platform to the contractors and architects to collaborate from their desktop or mobile devices, which could cost of rework, reduce exponentially, across all their project plans, specifications, photos, RFIs, and punch lists.

Increasing productivity directly increases profitability. PlainGrid is reducing the extra cost spent in between contractors and architects as they have done calculations and conservatively estimated that by using mobile construction management software, several companies have been able to save an average of 6.6 hours per week per user. Also, this technology can be used by architects to project managers, company vice-presidents to plumbers; anyone can easily use their plans or drawings as part of their work. 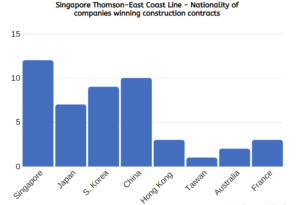 Over the next decade, two upcoming metro lines are to be built and the opportunities are expected to be given to the local Singaporean companies, as well as with the foreign construction companies. North-South Corridor Expressway’s construction contract has also been received by GS Engineering & Construction, China Railway First Group and also a local company Lum Chang and it is scheduled to begin in 2019. The demand is prospected to be strong for the construction services from the airport and maritime industries. The competition between local and overseas firms for building contracts does not end at Singapore’s railway sector it is presumed to be entered in many other industries as well.

Singapore’s construction industry was expected to rise in the total value of construction contracts to be awarded in the year 2018 and projected to be between $26 billion and $31 billion but later on, in September 2018, the small construction companies in the country were not able to pay their debts and was facing more difficulties. The construction industry employees a large segment of Singapore’s workforce and they were facing difficulties, such as rising interest rates on borrowing, the slowdown in demand for homes and delays in collections from customers; it is not only a tough time for employees but also for the whole country if the construction sector is affected. Improving productivity and reducing rework is the only antidotes for their tough time.

Construction companies in Singapore initiated pushing the industry ahead by starting to wise up to technology’s potential power to disrupt the industry with. Moving first and moving fast is key to staying competitive as the new technologies are disrupting traditional business models and the pace of change is accelerating.  According to a report by the McKinsey Global Institute, the global construction industry has a problem. Construction is one of the least digitised sectors around the world – second only to agriculture and hunting. To improve construction productivity in Singapore it all required a change as there is plenty of room of opportunity for the construction industry.