Singapore Reaches Beyond Its Borders for Talent in Robotics Industry

The pace of industrial automation is accelerating steadily across the world. Singapore, a renowned global financial hub, is endeavouring to build its reputation as a robotics innovator. Singapore is half the geographical size of Los Angeles that it covers only 276 square miles but it has an abundance of facilities in the robotics industry research field. The nation has a world-class educational system and the finance and industrial communities that are continuously pioneering technologies in virtually all key areas of robotics.

In Singapore, Singapore Polytechnic, Nanyang Technological University and the National University of Singapore are some major research universities that are playing a significant role in driving robotics innovation. In 2016, according to the World Robotics Report, Singapore ranks second after South Korea in terms of the industrial robot density. Singapore installed 90% of robots in the electronics industry. 488 industrial robots installed in Singapore per 10,000 employees, which is six times the average global robot density, in 2016 and in 2015 it was 398, which was also the second highest in the world. 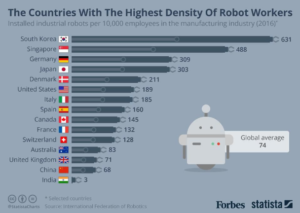 In 2016, the Singaporean government announced an additional $450 million committed to the National Robotics Programme over the next three years which boosted the robotics industry. Singapore is widely using robotics in many other applications, including healthcare, construction and various service roles. The current robotics industry stands at $16 billion is forecasted to reach $31.3 billion by 2020.

The Key Drivers to the Growth of the Robotics Industry in Singapore:

Over the past decade, Asia has been far and away from the leader in industrial robots. Robotics industry continued to be the world’s strongest growth market in 2017 with about 261,800 units sold which is a 37% increase in comparison to 2015 and also, it is recorded as the highest sales level for the fifth consecutive year ever. Companies prefer robots more than human employees as robots can perform tasks with greater consistency and reliability than human workers. It allows filling a difficult position with greater flexibility.

Robots minimise the human error in repetitive work that requires precision or consistency in output and allows for scalability of operations and greater flexibility in meeting the demands of the peak and lull periods. Deploying robots for 3D tasks (Dangerous, Dull, and Dirty) frees up the human employee for other work that requires the human touch, creativity, critical thinking, or problem-solving skills. Robots help in eliminating inefficiencies in the work process. Most of the companies are shifting to robots as they have reported that their performance improved to higher quality, higher sales volumes, higher levels of customers and greater efficiency after installing robots.

In Asia, about 1 million robots are in use as automation and robotics mean greater growth opportunities and economic risks in the region. Singapore can reap this digital opportunity fully with its world-class education system and with the support from the Singaporean government to invest in innovation to support a workforce for humans and robots alike. The nation has an unprecedented opportunity to supply robotics technology in Asia, as it will be the largest buyer so far in the world with $67 billion by 2025; if Singapore has the machines, parts and expertise to export into Asia.

SMEs and startups can utilise the expertise of their manpower in other departments and also give an opportunity to them to upgrade their skills as automation saves up the manpower resources. For instance, in restaurant waiters can more focus on higher-value tasks such as ensuring quick service, engaging with customers and promoting new menu items if drones are used to carry the food from the kitchen to the restaurant floor.

Robots can minimal and break the monotony faced by human workers by performing a number of repetitive tasks with least supervision. For instance, automating refuse handling could be a benefit if the collects refuse bins and empty it into the garbage collection of the truck, where the truck driver simply input instructions into the truck’s operating system.

Robots are now available at different sizes, which can easily be mounted on the wall and are even wearable. They are no longer massive machines now, which is difficult to move across locations.

Upgradation of robotics solutions take care of multiple functions and lower downtime and also come with free and regular software upgrades. The return on investment with a single robot can become evident in as short a period as a year to a year-and-a-half.

Dual-arm robots can work on production lines adjacent to human counterparts without jeopardising them. These robots detect changes using force sensors in the force applied and have speed-limited motors and rely on software governing safety that considerably reduces the uncertainty to humans.

Robots have the ability to manufacture products with lower material waste, higher quality products, precision and with better consistency and it can be expected from them.

Singapore Reaches beyond Its Borders for Talent with the Support of Government:

Robotics Industry presents a perfect synopsis for value creation. Manufacturers from Germany, Denmark and Japan do not include the integration of robots into SME or large-scale manufacturing and logistics. In Singapore, such deployments can be helpful to increase automation in the country for improvising the productivity and these are really adding value and not creating it. Value creation in the robotics industry may entail the developing and building its own robots in the country that could then be exported globally, especially to ASEAN countries and East Asia.

Singaporean government plays a crucial role in nurturing and developing the robotics industry in the country. The concept of the robotics solutions is not new to Singapore, but with the continuous push from the government for greater automation in the economy; the businesses in the country are becoming more convinced of the benefits of adopting the technology. Since 2006, the Singaporean prime minister’s office is responsible for setting the development goals and nation’s research; and the National Research Foundation was established in January 2006.

The NRF develops specific policies and plans for research, innovation, and enterprise for the robotics industry and also to strengthen Singapore’s scientific and research capabilities the PMOs provide funds for strategic initiatives and also helps in building R&D capabilities by nurturing research talent and attracting foreign researchers and scientists as well. The big boys of the robotics, such as ABB, KUKA, Fanuc, Schaffer, Daifuku, Krones, Kuka, IMA Industries, Kawasaki, Yasakawa Motoman, Denso, Pro Mach, etc. would seem to be too far from the reach of the newcomer in the industry. Competition from established manufacturers resembles quite challenging for new companies.

GreyOrange Pte Ltd journey started from the building humanoids now turned into the world’s one of the largest automation companies today and a global leader in AI-powered robotics systems, founded in 2011. GreyOrange has developed a product roadmap, which includes speed, accuracy, scalability, rapid delivery, etc. that looks out three years plus. From picking to sorting the startup provides a flexible and scalable robotics solution. The startup is building elastic logistics which is not easy but it is possible with robotics where the consumers no longer have to design to peaks, instead, they can use automation to change a wide range of conditions including peaks.

World’s leading soft robotic company, Roceso Technologies that focusses on dignity back to people’s lives and bringing independence to them was founded in 2016 by Dr Yap Hong Kai and Dr Raye Yeow. They provide functional assistance to patients with their soft robotic solutions which limb motor function impairments during rehabilitation and daily living. In 2018, Roceso Technologies received ISO13485:2016 certification for its robust quality management system. EsoGlove, the first product of the startup is the world’s lightest hand rehabilitation and exoskeleton device offering top functionality and comfort to patients. Before the product launch, the startup received purchase requests from potential customers worldwide.

A recent survey on the Global Future of Work, 48% of employers believe that they will need fewer employees in the future in the Asia Pacific region, conducted by Willis Towers Watson in 2018. In this survey, 909 companies were polled from around the world and 507 companies are alone from Asia Pacific region. Most of the companies from the Asia Pacific region had revealed that they are planning to expand their business into automation entirely in the next three years and 85% of companies are already using artificial intelligence and robotics according to the poll. It is projected that in Singapore, on an average 29% of all the work being done on automation.

Singapore’s Changi Airport is the world’s best airport in the world for the past six years voted by Skytrax, testing airport bots of the future in the airport. Robots in Healthtech industry, Restaurants, Coffee Shop, using in driverless technology and a very first robot host for a National Day Parade at Marina Bay Floating Platform, etc. these robots are utilising everywhere in each industry. Future all depends on the robotics industry for each and every small requirement. Startups are applying technology to ease the work culture of industries and more cost-effective. With the support of the Singaporean government, startups and government both are work in a way to take Singapore at the best and largest manufacturer and supplier of robotics position in the world.