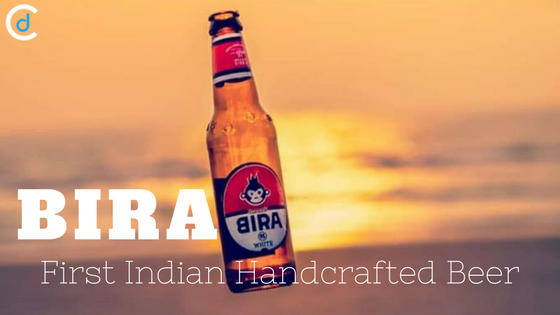 Over the years, we have seen numerous of changes everywhere in each sector of the industry in Robotics, Healthcare, Ecommerce, Travel and Tourism, Food and Beverages, Banks and Financial Institutions and in so many other industries. Each and every sector is transforming according to the need of the time. In past some years, there has been a huge change in the Liquor Industry. Craft beer is one of them, beer and its variants seen a tremendous change in the world. Bira 91 the Indian beer producer who shattered the dominated market of Kingfisher Strong and Haywards and put a firm root of Craft Beer in the Indian market.

In 2015, Ankur Jain introduced Bira 91, first Indian handcrafted beer under his established company B9 Beverages Pvt. Ltd, thus Bira 91 came up with a change which millennial consumers were looking for past some years. In 2007, the founder returned to India after running a healthcare startup in New York, prior to that, he completed his bachelor’s degree in Computer Engineering from Illinois Institute of Technology, Chicago. In 2009, he started Cerana Beverages that imported and distributed premium craft beer brands in Delhi, Mumbai, and Bengaluru from the US, Germany and Belgium without having a prior experience in the liquor business.

Ankur Jain made a clever decision to establish a craft beer platform in India based on its research and stats. He noticed that India consumed around 270 million cases of beer (including craft beers, microbreweries) in 2014-2015. He observed a greater market for this and grabbed the opportunity. Before origination of Bira 91, he raised seed funding of $1 million in 2014 from 6 of his college friends to launch its own bottled craft beer and after a year he extended his business and thus Bira91 came into existence. Bira 91 formally launched in India by the Belgian Ambassador Jan Luykx in an event which was attended by more than 500 guests in February 2015.

Beera 91 has raised total funding of $27.9M from four round of investments.

“By 2014, I realised it was time for us to introduce a brand that resonated with the young urban population of India with key focus areas being taste, flavour and quality,” said Jain.

Bira 91 is just 4-year-old and effectively doubling its volumes every quarter and is a huge success among consumers for non-traditional beer variants who indicatively accepting. Bira 91 disrupted the market of the big boys like  Kingfisher, Tuborg or Fosters, etc. The startup became an instant hit during its launch year among the urban people with the rising sale of 5 lakh cases in 2015 and 20 lakh cases in 2016. Although beer is expensive because alcoholic drinks are taxed more according to their volume in India, yet Bira manages its price so nominal, like Kingfisher, 330 ml bottle for Rs 90.

“Last year we sold about 5 lakh cases. This year, like I mentioned, we are targeting sales of 20 lakh cases, which is a four-fold increase. We don’t have a fixed break up for which beer will sell how much. But right now, Bira White is the largest selling beer for us. It is a 2:1 ratio between White and Blonde. I would assume Bira strong will have similar sales to that of the blonde. And the low-calorie beer will be niche. So at the end of the year, our existing portfolio-White and Blonde-will probably account for 60-65 percent of our sales while the new beers would account for the rest with the strong outselling the low-calorie version,” said Ankur Jain.

Currently, Bira 91 has its 5 products in two categories Bira 91 White, Bira 91 Blonde, Bira 91 Light are in the mild category and Bira 91 Strong, Bira 91 The Indian Pale Ale are in a strong category. Last year Bira 91 launched 2 more products; one is Bira91 Strong, a wheat-based strong beer aimed at covering the market of Kingfishers and Tuborgs and another is Bira91 Light, a low-calorie beer especially for them who wants to drink but wants to avoid the notorious beer belly as well.

Still a Tough Competition to Cover:

Bira 91 currently, selling in fifteen cities in India and in New York and planning to expand its operations in 20 cities in India and seeking to enter new markets such as Singapore, Thailand and Malaysia. The company has its 1st brewery in Belgium than it shifted in India in 2015 in Indore, the 2nd brewery is in Nagpur started last year and the 3rd one is planning to start in Rajasthan.

Bira 91 shattered the existing market of big boys; such as Kingfisher, Tuborg, Fosters, Budweiser, Heineken, Carlsberg, etc. The startup always wants to cover the market of these big boys on the basis of the need of the taste-oriented strong beer category. Last year Bira 91 had almost 50% sale from bars and restaurants and they were expecting 35% from the bars and restaurants in future and majority part from liquor vends and shops.

In India, the big boys market is still a tough competition for the Bira 91 in terms of strong beer whereas last year they launched its strong beer to match the tough beat with the competitors. Whereas it will be a challenging task for the startup to convince the habitual drinker who just goes with its regular drink doesn’t pay heed to others. The other fact of the Indian market is quality at cheaper prices and here cost-cut isn’t the ultimate solution, with cost-cut the quality is a major factor to maintain.

Apart from India, the aim of the Bira 91 is to cover the global in craft beer. To fulfil their aim the first city they targeted was New York, where they launched and got the international validation. After New York, they are aiming to cover Boston and New Jersey, which is the toughest market in the world for craft beer. As in those countries, the originated craft beer of the pubs and bars under their own is something that attracts customer to the pubs and that particular bar. In India, Bira 91 easily covered the market and became a brand name within 2 years since from its launch but the situation is vice versa in the foreigner market. In foreign market, the pubs and bars have their own beers and which is very famous at the regional level. So it is quite competitive to cover the international market.

In just a few years, Bira proclaimed a fame and brand image that is equivalent to several existing big brands. Bira 91 covered the most abundant market of the women’s with its mild crafted beer. The category that goes with the much milder and low-calorie beer, Bira 91 beer’s cover the amount of alcohol (4%) very low in comparison to other. Targeting the market of the person’s who need some refreshment daily at a low price and the amount of alcohol is very low it doesn’t affect them that much in daily routine and also fixes in the pocket.

Bira 91 was featured in the United Nations’ Beer of the Month Program in May 2017. Bira 91 is a most popular brand in India now, since its launch, Belgium mark on Bira 91 accomplished the target well and now shifting its manufacturing unit in India helps in cost-cutting which was a great strategic move in terms of establishing a brand.

“We did reduce prices in 2015, as we were initially importing the beers from Belgium. When we started brewing them in India we passed on the benefit to the market and cut the prices. We want to give a product that is well designed, tastes good, and at a pricing which is accessible. We do not want to be a luxury brand but an accessible Indian brand,” said Ankur Jain.