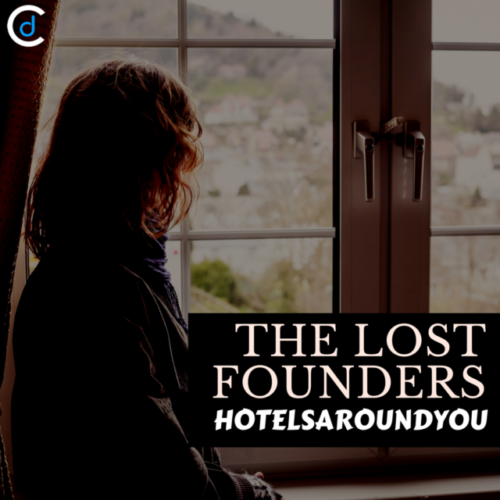 In today’s edition, the new story of ‘The Lost Founder Series’ is about the budget hotels startup HotelsAroundYou story. Another story of the hospitality sector startup failure after Stayzilla’s story. Let’s know the reason behind the failure of a budget hotel startup, the reason behind shutting down, the economic impact, overall impact on the industry and the mistakes they made which led the start-up toward Death Valley. The lost founders is a series in which we will discuss the start-up stories and the reason behind the biggest failure of the start-ups. Let’s begin with the hotel budget startup HotelsAroundYou story behind the failure – the Indian start-ups’ shutdown in 2017.

Funding: The startup had raised $125.4K amount of fund as seed funding led by 10 angel investors associated with Venture Nursery and from Artha India Ventures in Oct 2014. The list of angel investors included Bharat Banka and Shravan Shroff, Amit and Arihant Patni.

A Mumbai-based, hotel budget startup, HotelsAroundYou was also known as Instant Hotels Around You Pvt Ltd facilitates users with the limited location-based hotel’s feature and also assures the day’s best price deal for a hotel. It was a last minute hotel booking platform making the users experience easy with secure hotel booking at the last minute by booking the same-day unsold hotel rooms easily at the best price.

The seed funding they had raised from the market all goes in vain. Other than this, it was a setback to those investors who invested in their company and for their users. Major competitors for the HotelsAroundYou was RoomsTonite, Nightstay, Stayzilla, Oyo Rooms, Airbnb, MakeMyTrip, Goibibo and various other alternate online platforms for room booking startups too. They had wasted so much time on a service, which is already providing by most of the experienced players of the hospitality industry.

“The startup has ceased its operations,” said a source with undisclosed identity from the company. Further, he added “Travel platform is a very complex space to survive. It has needed experienced players with funding, who exist already in the industry that makes it all the more challenging task for HotelsAroundYou.”

We are starting with some reviews about the start-up who had dealt with the companies in past, in short, their old customers describing their experience with the company. Some of their past customer’s reviews were satisfying that they were happy with the customer service and there were some who were facing problems while using the app and its services. So the customers were satisfied with the HotelsAroundYou startup. Rest the review itself explains the entire story of the start-up. Below are some reviews:

“…good concept…badly executed…took three tries to get the OTP. It doesn’t allow one to book a hotel room a day in advance…may this app help only those who are desperately searching for a room the same night…searching for a city, the app gave up citing server error…not once…but multiple times…disappointed…” – a customer

“…last minute friend…stuck in Delhi at 9:30 in the night…HotelsAroundYou helped me book hotel rooms in Mumbai & Pune so I checked them out…Voila, Delhi hotels…my stay at The Bristol was marvellous…saved me and my money…” – a customer

According to the LinkedIn profile of the HotelsAroundYou owners, it showcases that Harsha Nallur is now working as assistant vice president for global growth at restaurant listing platform Zomato. Mohsin Dingankar is now working at Sharjah-based premium travel firm Musafir.com on the post of the product manager. While the third co-founder Animesh Choudhary running his own established firm before two years HotelsAroundYou, in 2011, Studio Incandescence, Mumbai-based brand engagement firm.

The reason behind the failure and shutting down reason for the startup was the inability to raise follow-on fresh round funding from the market. The startup led to the Death Valley cause of amidst funding crunch and they were unable to raise the next round of fundraising. Exactly the cities in which the operation was not clear during the shutdown process of the startup. Jaipur, Delhi, Mumbai, Pune, Shirdi, Chennai, and Bengaluru are some cities where they were working according to older media reports.

Tourism and Hospitality Industry is a wide sector to cover if any company is covering this industry, it should have to work accordingly the different segments of the industry to successfully grow in the field. The reasons which led the startup toward the death valley was as we above said according to this they were working on all the segments but only to those which were instantly available at a time. Instant Availability applicable in all four segments of the Tourism and Hospitality Industry, such as Normal Hotels, Luxurious Hotels, Short-Term Apartments and Short-Term Rental Appartments already providing by other market players the same, they were not providing something specific or different from others, and instead of saying it separately they did not target any specific segment strongly like other players.

Lacked in Targeting the Specific Segments:

When the startup lacked in targeting the first segment properly then they must have shown their expertise in the field and tackle the situation strongly by marketing it properly. Advertise them as expertise done in a particular specific segment; we are only working in this field only. But the main point is that the expertise could only help them if they were working at PAN India level platform. But they were working at only some 4-5 cities which are not useful in any way they can’t get enough profits from this. Instead of going only on just 2 to 3 cities, in the beginning, they should have used that initial funding on PAN India network creation. After that the further funding they should have used in creating network better with better services rather than starting operations in just 2 to 3 cities.

The reason behind the whole above-said statement is customer behaviour. According to the customer psychoanalysis, in the Travel and Hospitality industry, the user uses pre-booking facility if he/she is travelling any area. If someone needed instant hotel booking services after reaching the area, the user does not opt the online booking option, what they do mostly, they visit any local operators of the area and use the services in-person rather than searching online. They easily get the accommodation as per their requirement, quality and budget but all the transaction happened then was in-person. Online option at the instant time of need is used rarely at that particular time. The online option is not in the consumer behaviour if they required something instant the topmost factor behind the failure.

Where did HotelsAroundYou go wrong?

Through the customers’ reviews, we can easily understand their services and how much they were dedicated to their work. From mostly reviews, it is clearly explaining that the users were satisfied with the services provided by them. While some users were not in the favour of the startup and the customers were not satisfied but the reviews were mostly in the favour of the startup that clearly shows the company was in a good direction. But what went wrong later on? The question arises in the mind, let’s find the answer.

They were needed a strong advertising and marketing strategy for this to recall a person at an instant time. The trust factor is the main and topmost requirement of this industry, which they only gain through advertising and marketing when peoples are connected in bulk with the platform. When the operations were only be performed in some cities how people do know about the startup and their expertise.

Subsequent to this where they were lacking next was they didn’t study the consumer psychoanalysis properly. The area where they lacked otherwise it was not a bad idea, the startup could easily be run but the implementation of the strategy gone wrong. Their step by step strategies was wrong which led the startup to the Death Valley. They should have analyzed the behaviour of the consumer about how the people exercise decision when they’re in an emergency, through this they easily got to know the idea and strategy how to implement the things properly.