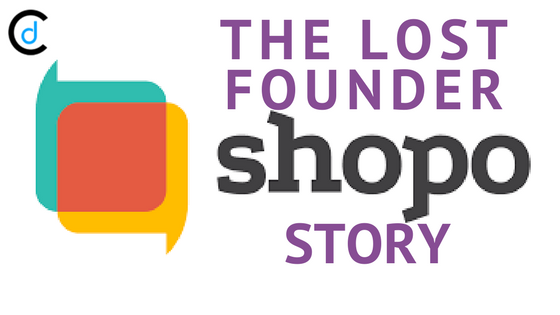 Founder(s): Theyagarajan S, a separate entity registered for Snapdeal, after the acquisition made in 2013

Funding: The startup had raised an undisclosed amount of seed funding on Aug 17, 2011, from undisclosed investors. According to Crunchbase, Snapdeal acquired Shopo in May 2013 but relaunched it in 2015. In Sep 2015, Snapdeal announced the investment of $100 Mn in Shopo over a period of two years.

Chennai-based startup Shopo was an online marketplace where contemporary and traditional Indian designer, handcrafted and homemade stuff, and their creators were found. The startup was originally founded by Theyagarajan S but later on, in 2015 Shopo relaunched as a zero-commission platform for all small sellers or buyers from across all over India where buyer and seller could freely chat, buy, and sell on the platform.

Shopo team had helped in providing a zero-commission based platform to more than 2 lakh sellers to start and grow their own online stores, especially the Mompreneurs and Homemakers. After the shutdown of Shopo the major loss to all the 2 lakh sellers on the platform, this is a huge loss to the seller. Another significant loss to the employment sector, the job opportunities raised by the startups also demolished. A pure loss for investors and the initial amount invested by the co-founders all got in vain.

As we always discuss the loss of employment cause it is linked in many ways other than sitting job done by the workers, the loss of employment. According to a Shopo’s blog post, the reason behind this shut-down was because of cost cut down made when Snapdeal was aggressively matching the beat in optimizing the costs among the e-commerce competitor Flipkart and Amazon.

“The e-commerce market in India will continue its robust growth. However, we realize that it will take some more years for a broader ecosystem to develop around the C2C segment. It is tempting to go on, but it is often beneficial to pause, take stock and plan ahead for greater success. It is time for us to pause the Shopo journey for now,” according to Shopo’s blog post.

We are representing some reviews about the startups from their ex-employees and customers. Let’s know what their reviews are and experience with the startup. Below are some reviews:

“…the online store Shopo.in…introduced by Snapdeal…anyone can sell without tin number…no need to show any documents…engaged with the website…but unfortunately it is worst…the company did not invest to promote the application…no one knows about the site name and their features…listed few products over there for long time…but have not met any consumer…wasted my time…” – a seller

“…purchased dresses…from a seller named from Noida/Ghaziabad…asked me to deposit the amount in his bank account…promptly did…incident took place in February 2016…since then haven’t received the items…the seller uses abusive language…hasn’t even refunded the amount…suggestion to users – do not use this Shopo.in…seller is a big fraud and cheater…should be put behind bars… – a buyer

“…worst shopping experience ever…so many problems can’t even mention… the box that came into is broken…the glass of aviator is broken from inside…glass has a lot of scratches…used (maybe for months)…cleaning cloth has big blood stains on it…in short, NEVER buy anything from SHOPO…aviator is roadside cheap one (Fake)…easily can get in Rs.50 or 100(Max)…” – a buyer

We can easily analyze the review about the company from the sellers and buyers reviews. From the above reviews, we conclude that 80% of their buyers were not satisfied with the website and its work and from their services, provided to the customers. Whereas there are some positive reviews as well but there are more negative reviews from their buyers and sellers too. We can’t really say about the positive reviews about the startup. So from reviews, we tried to define their experience with the startup Shopo. Sellers were not satisfied with the Shopo’s management and services provided to the sellers.

Founder of Shopo Theyagarajan S LinkedIn profile shows he was working as AVP Product Management at JusPay until December 2016. No further information is available about their current whereabouts. Whereas Snapdeal’s co-founders Rohit Bansal and Kunal Bahl operating their current business model Snapdeal.

If we have a look at the overall overview of the startup then the review shows the states of customers that a huge number of the buyers and sellers were not satisfied with the Shopo’s operation and management. The sellers obviously demand the promotion of the product from the company or the platform, providing such services in the affiliate marketplace. Without promotion this is almost impossible to know about the product, how do the buyers know about the sellers and their product by genuine reach? There should be a proper outlining for the business model without a proper track to follow it is very difficult to sustain. There should be a promotion and rating method, like Amazon, Flipkart, etc. these are also providing affiliate marketplace platform for sellers and following a proper procedure of business.

The business model for such affiliate marketplace is really a major factor and the Shopo’s business model was flawed and this is the reason why they were not attaining much profit as they could have gained. They got a huge number of sellers on their platform but they could not attain as much profit as they could gain. There is a point where a company attains a situation of no profit no loss, whereas the company wasn’t achieving its break-even point. The investment made on the site was such a huge in amount but the returns were not the same as the investment amount, the strategy of the company was flawed. All over we can say there is a flaw in the business model of the affiliate marketplace providing Shopo.in, acquired by Snapdeal.

Does Parent Company make Impact on the Shopo.in?

The parent company Snapdeal impacted the Shopo’s market. The shutdown announcement was made in February 2017 through the blog post of Shopo. The reason was said the merger of the Flipkart and Snapdeals merger and the battle of surviving in the competition of e-commerce platform amid Flipkart and Amazon. It affected the Shopo’s market cause of costs cutting and conserving cash.

The shutting down step was taken after the Snapdeal and Flipkart’s merger news rumoured in the market and it shattered the startup Shopo.in. If a parent company is not running great then it definitely affects the subsidiary company, how they can run it properly if they are not giving the proper planning and running an accurate business model. The business was running but not in a proper method as the seller do not have to register with a TIN number and there is no requirement of such necessary documentation as needed to run a business under regulatory gamut. They were lacking in management somewhere, either the scarcity of the funds or lacking to manage their operations.