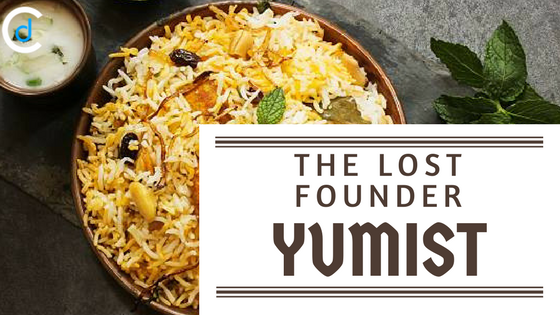 Funding: In December 2015, the startup had raised the seed round of funding of $2 million (INR 13.8 Cr) from Unilazer Ventures, Orios Venture Partners and Steven Lurie. Also prior to that in January 2015, Yumist had secured $1 million (INR 6.54 Cr) amount of seed funding.

Gurugram-based food tech startup Yumist delivers on-demand comfort, homely and delicious meals prepared in their own kitchen in Gurgaon, South Delhi, and Noida. Yumist provided the home-style meal to office goers, starting at Rs 100 competed with Foodpanda and Zomato. The startup was targeting to cover the daily meals market and aimed at building the brand in India and disrupted the market of sub-standard food providing by the unorganised players, such as “dabbawalla” and “corporate canteens”, etc.

Employment sector is always the major loss bearing sector, the job opportunities raised by the startups also demolished that startup too. A pure loss for investors and the initial amount invested by the co-founders all got in vain. The reason behind shut-down is due to the fund crunch, the startup was in seek of fundraising until before the shutting down of Yumist. At last, the startup pulled the shutters.

“Also, every company has a context in which it operates – the economic climate, investor sentiment, the sector one operates in. Essentially, there are external factors which one can’t really control. 2016 onwards, food tech (in the manner the term is loosely used) had amassed notoriety with investors and media and became almost a dirty word. We failed in all our attempts to fundraise since then, as investors wanted to wait it out,” the startup’s blog post read.

“We failed to raise the kind of capital that this business required while staying true to the customer problem. In hindsight, there’s a bunch of internal and external factors that led us to this dead end,” said in Yumist blog post.

According to their LinkedIn account, Abhimanyu Maheshwari continued with his six-year-old company Zing Restaurants post-shutdown and Alok Jain joined Swiggy as EiR in March 2018.

In May 2016, Yumist shut down its operation in Bengaluru the reason being exclaimed that they didn’t own a kitchen facility there in the city. Similarly, in a meanwhile, Yumist launches its mega kitchen in 12000 sq ft for Delhi NCR region, at the time when the startup was bearing the loss of shutting down services in Bangalore, they increased their expenses even more with the launch of the mega kitchen. The startup used its funding in expanding the business which is important for any startup to increase their revenue. Funding doesn’t mean that the startup will bear all its cost through funding the reason being that the business wasn’t generating revenue. Might be the mega kitchen decision they opt was wrong at the time when they really need was time and wrap up all the losses first by concentrating on the remaining areas rather than expanding. The funding was helping to bear the cost only not in generating the revenue. After Bengaluru losses they should’ve waited till then, they cover up all the funds back in their treasury before taking another major step.

“Our delivery outlets were breaking even at just 70 orders a day; we were acquiring new customers at Rs 180 and recovering back this money within 45 days. Owing to our product quality and customer experience, we enjoyed the good word of mouth (with 50% of our new customers coming through referrals), 70% of our monthly orders were from repeat customers and from March until September we tripled our revenues and gross margins. With these trends, Yumist would have become a profitable company by June 2018,” said in the blog post.

“We are shutting shop today. We failed to raise the kind of capital that this business required while staying true to the customer problem. In hindsight, there’s a bunch of internal and external factors that led us to this dead end. From launching in a second city prematurely, or committing to high growth, high burn model just because prospective investors wanted to see that back in 2015, or taking a tad bit too long to find the right business model, we made our mistakes. We learnt from these mistakes and recovered fast, but maybe not too fast,” stated the founders in a blog post.

Yumist joins the list of the failure food-tech startups along with various others despite the fact that how much they attracted the venture capital investors and raised funding eventually they ended up. Yumist was figured out a profitably scalable business model yet they entered the path of Death Valley as they tried to work according to the prospective model of the investors. The startup figured out a profitably scalable business model and developed the demand prediction algorithm successfully that within 15 minutes the ordered delivered and one such order delivered in every two minutes. Performing on the high growth, high burn model they made several mistakes.

Although the idea behind the expanding was not bad and they were expanding it in terms of future aspect but rather than focussing on the future, they should’ve focussed on the current situation first about increasing their customer growth, revenue and the trust factor among the present customers. But what they actually focussed on expanding their wings in offering all-day options, breakfast and snacks, etc. For any business to run it properly it is required to focus on the present situation first rather than taking the further step for future goals. The current business stability is the most important factor to run a business properly. After acquiring funding if a business spends it without evaluating the consequences then it couldn’t be possible to survive and run operations properly. First of all, the major concern point was the stability of the business first then expanding for future operations.